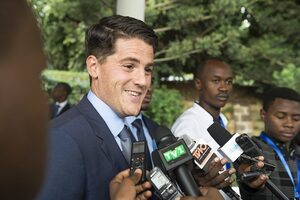 Via Rwanda paper The Chronicles:

In March 2015, Rwanda hired an Irishman Johnathan McKinstry, also known as Johnny, as head coach for the national football team Amavubi paying him $11,000 as monthly salary.

He was abruptly fired in August 2016, after a string of poor results and failing to guide the team to the 2017 Africa Cup of Nations which was hosted in Gabon.

Rwanda hoped the decision would eventually never be implemented.

On March 25, FIFA made the final ruling on the matter, and even indicated that the amount had accumulated to $217,195. Rwanda was given one month, with an April 25 deadline.

If Rwanda had not paid up yesterday, FIFA had said the country would be removed from all its activities.

Gets around, in fairness.