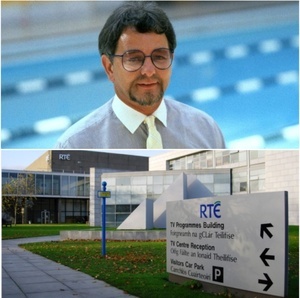 Johnny Watterson was one of the first journalists to write about former Irish swimming coach George Gibney in the 1990s.

Mr Watterson has written a 3,000-word article on Gibney for tomorrow’s Irish Times.

RTÉ has reportedly declined an ad from the newspaper promoting the piece because it used the word ‘paedophile’.

He sought and won a controversial  High Court judicial review in 1994 which quashed all the charges against him.

The inquiry was ordered to examine how complaints about Gibney and fellow coach Derry  O’Rourke were handled.

In the end 70 witnesses, including 20 victims, 12 parents, seven coaches, and a number of officials from the IASA and individual swimming clubs took part in the inquiry.

And, while neither coach was named in either the terms of reference or the eventual report, the conclusion was certain. 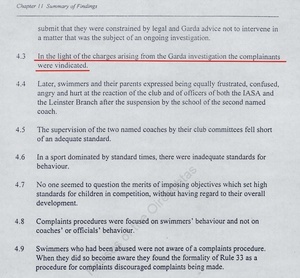 From the report, Dr Murphy stated:

“In light of the charges arising out of the Garda investigation the complainants were vindicated.”

Previously: ‘Time To Bring The Gibney Nightmare To A Close’

The president of the board of directors of the American Swimming Coaches Association, Don Heidary, yesterday told this reporter he had never heard of George Gibney and that the controversy surrounding him preceded Heidary’s involvement with ASCA.

At the same time, Heidary did not utilize the opportunity to issue even a ritualized denial of the possibility that ASCA might have helped set up Gibney for employment in America as he was facing allegations of sexual abuse, which would culminate in a 27-count criminal indictment in Ireland.

My email exchange with Heidary follows an essay he wrote for the website SwimVortex under the headline “The Real Culture of American Swimming.”

It began: “Over the past forty years, I have coached in the summer-leagues, at the high school level, and as a proud member of USA Swimming. What I have seen, and have been blessed to be a part of, is a culture that is anything but predatory, abusive, and certainly not profit-driven.”

I noted to Heidary that I believe his own club, Orinda Aquatics in California, was where one of my daughter’s teammates at nearby Bear Swimming migrated in 2008 after the teammate, at 16, was twice raped by Bear head coach Jesse Stovall, who was chaperoning her on a trip to Florida for a national meet.

In 2010 Stovall pleaded down criminal charges so as to avoid prison, and was added to USA Swimming’s banned list.

I wrote Heidary: “Since you are president of the ASCA board, I ask for your assistance in the mystery of who wrote and who brokered the letter offering George Gibney a coaching job in the United States in the early 1990s while he was facing dozens of criminal charges of child sex abuse in Ireland.

“In his opinion, in my recently settled Freedom of Information Act lawsuit, U.S. District Court Senior Judge Charles R. Breyer took pains to point out that I am someone who ‘suspects that the American Swimming Coaches Association greased the wheels for Gibney’s relocation.’” (And I pointed Heidary to the almost fully redacted copy of Gibney’s job offer letter, which submitted at the time of his 1992 American visa application, here)

“I’m sorry I can’t help with this. Your email is the first I have ever heard that name and I have never heard anything related to this issue. In the early nineties I was coaching a summer-league and high school team in Orinda and not affiliated or involved with USA Swimming or the American Swimming Coaches Association.”

In a follow-up, I said that Heidary was not answering the question I was posing. The question, I persisted, does not concern his personal resume or even his level of knowledge of Gibney — the most notorious at-large sex criminal in global sports history — but rather the historical involvement of ASCA, the organization Heidary leads.

As Concussion Inc.’s coverage through the years has pointed out, ASCA executive director John Leonard told us: “We do not have an organization that deals directly with children, nor is that part of our purpose in any way, shape or form, according to our formative documents from 1958 and thereafter.”

Heidary did not respond to the follow-up. This article is being forwarded to the entire ASCA board for further comment.