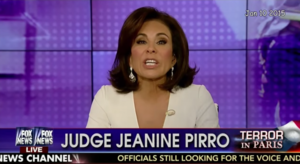 “We need to kill them, we need to kill them. The radical muslim terrorist hell-bent on killing us. You’re in danger, I’m in danger. We’re at war and this is not going to stop. After this week’s brutal terror attacks in France, hopefully everybody now gets it and there’s only one group that can stop this war, the muslims themselves. Our job is to arm those muslims to the teeth, give them everything they need to take out these Islamic fanatics. Let them do the job and when they do, we need to simply… look the other way.”

Judge Jeanine Pirro on Fox News at the weekend.