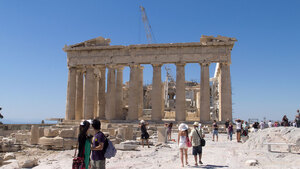 The vultures are circling.

The looting of Greece has begun.

The new agreement of 12th July between Greece and European authorities robs Greece of its sovereignty and confines it to a neo-colonial status, i.e., a protectorate of the troika.

The agreement requires Greece: to repeal all progressive legislation it had passed since coming to power six months ago; to seek approval from the troika before enacting important pieces of legislation; to commit to automated austerity by introducing “quasi-automatic spending cuts” in case primary surplus targets are not met; to expedite foreclosures, evictions and liquidation of businesses and homes that cannot repay their debts; and to ensure that collective bargaining is weakened or not allowed.

But perhaps the most humiliating clause is that Greece is required to privatise a mind-boggling €50 billion of public assets. These will be sold off to private investors, many of which will be foreigners.

In short, the vultures are coming, and they’re hungry.

The funds raised will be used to pay back debt and recapitalise banks, and there’s also a mention that some of the proceeds will be used for investment in Greece, but it remains to be seen how much monies will end up fulfilling that purpose.

The deal has been described as “a desperate yard sale of whatever Greece can find”. One adviser to the Greek government summarised it thus: “It’s basically saying sell the memory of your ancestors, sell your history”.

In particular, the agreement states explicitly that the electricity transmission network operator (ADMIE) must be privatised, likely to be sold off to overseas interests.

The body that will manage the privatisation process will be located in Greece, but in practice, it will be controlled by the troika.

This is not the first time European authorities attempt to drive through such a deal. In 2011, Athens had also agreed with the troika to raise €50bn in privatisation proceeds, but didn’t achieve this—it only privatised €3.2bn of assets, falling well short of the target.

Therefore, in practice, it is unlikely that the €50bn mark will be reached this time, but it is still very revealing of European authorities’ intentions.

It seems unlikely that archeological treasures like the Acropolis will go, due to the furore it would provoke. However, two German politicians recently suggested that even that should be included in the fire sale, so who knows. Less important ruins, however, could well be sold.

In order to understand how rapacious the deal is, one can look at what exactly could be included in it.

A good place to start is the website of the privatisation agency set up in 2011 to handle the previous €50bn privatisation program. It’s called the Hellenic Republic Asset Development Fund (HRADF) and its fascinating website  lists just about everything Greece can sell, with pictures, maps, and descriptions.

It is a real flea market where one can find monuments, beaches, airports, ports, postal services, utilities, and so on. And the site is in English: after all, global investors have to understand what they’re going to buy.

Here is a sample. Prices are not displayed but I include descriptions of the assets from the website.

1. Beaches
The property has the potential to be developed into a large scale integrated tourism, leisure, residential project around the existing golf course on a well established vacation destination such as Rhodes.

2. Castles
Castello Bibelli is a property of significant historical and cultural value. The main building “CASTELLO” of 1.968 m2 built area, is of neo-Gothic style, made from stone with tile roofs and its distinctive feature are the two turrets and patio. The property also includes other four auxiliary buildings, with a total built area of 457 m2. Built at the beginning of the century by Italian Admiral Bibelli, in a wooded hillside, within an area of 77 acres.

3. Thermal Springs
Greece is endowed with natural mineral springs and geothermal waters which form an integral part of the country’s national wealth. Their therapeutic properties are well recognized since ancient times, offering treatment opportunities for various ailments in a natural way (hydrotherapy).

4. Stadiums
The Peace and Friendship Stadium is a characteristic example of the last 20 years of the 20th century architectural style and a worldwide well-known building, having hosted multiple international and national sporting and cultural events.

6. Athens water supply and sewerage company
The Athens Water Supply and Sewerage Company has the exclusive right to offer water and sewerage services in the Greater Attica Area. The term of this right, as well as its renewal, is regulated by a a 20-year Agreement.

In short, the message is clear: start shopping quickly—or you risk losing the prize. Conversely, progressives must organise resistance without any delay, or Greece will be looted.

Julien Mercille is a member of the Irish Greek Solidarity Committee. His new book, Deepening Neoliberalism, Austerity, and Crisis: Europe’s Treasure Ireland (Palgrave) is out this week. Follow him on twitter: @JulienMercille 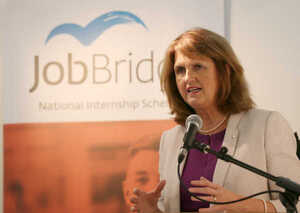 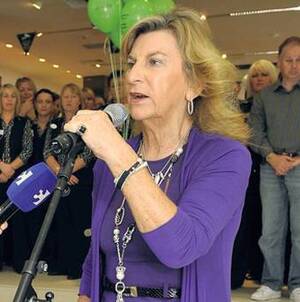 Above: Joan Burton and Margaret Heffernen

How Dunnes Stores and the Labour Party devalued work.

Last week, more than 6,000 Dunnes workers throughout the country staged a one-day strike. The problem is their zero-hour or low-hour contracts. These require that the workers be available to work, but they don’t guarantee a decent number of hours of work per week. Therefore employees never know how much income they will receive every week. The time of their shifts also changes, so they can’t plan childcare, leisure, or anything.

The Dunnes workers want guaranteed hours of work to ensure they’re not shuffled around as Dunnes’ owners see fit. This is not a revolutionary or radical request: others do guarantee hours, including Tesco, Arnotts, Marks & Spencers, to name a few.

Of course, this is a way for employers to control labour. Employees who make too many requests for better conditions or want to organise can see their hours cut or their shifts moved to hours which they can’t attend. That’s why 85% of Dunnes workers said that one method of control on the part of management is to preserve the system of insecure hours of work.

Meanwhile, the chief of Dunnes Stores, Margaret Heffernan, is very comfortable. Her net worth is estimated at €600 million. She has a luxury home in Barbados. She has another luxury home in Stillorgan in south Dublin which she is currently remodeling by joining three other houses with an extension including a cinema and an indoor swimming pool.

It is telling that when Margaret Heffernan took over the company in 1993, about 80% of Dunnes Stores workers were full-time. Conversely, today, 80% of staff is on part-time contracts that guarantee only 15 hours a week. Most staff are young and female.

The situation has created enough of a stir for Joan Burton to make a public relations appearance for a few minutes standing next to the workers on strike in front of the cameras.

But the Labour Party has contributed to the casualisation of labour, unemployment, and bad work conditions over the last few years. This has been done in three main ways.

1) Austerity: Support for austerity has deepened economic problems, increased unemployment, and prevented the economy from recovering. That’s the fundamental issue on which the current government should be judged—and kicked out of power.

2) Labour “reform” (another word that’s supposed to make us think it’s a great thing) for those lucky enough to still have a job: The workforce in the public sector has been reduced by 32,000 since 2008, at a time when the population has been growing and demand on public services is increasing. That’s on top of pay cuts and other schemes to increase management’s control over workers, even when management itself is incompetent.

3) Degrading work conditions by compelling the unemployed to reintegrate the workforce under bad conditions: The best known example of this is JobBridge, but there are many other similar programmes. JobBridge is a national internship scheme that provides work experience placements for interns who are paid only €50 per week on top of their existing social welfare entitlement, which equates to an hourly wage of €3.65 for a 40-hour week.

This amounts to a huge subsidy to the private sector, which accounts for approximately two thirds of internships. Effectively, the rise of internships has replaced a range of full-time employment opportunities that would likely have been made available anyway in the absence of the programme. There is little doubt that businesses have been using the scheme to replace paid work and the difference is going directly to the bottom line.

To take one example, Tesco has been using JobBridge to advertise for positions such as filling shelves according to merchandising plans and ensuring that customers do not have to queue while other companies such as fast food chain Sbarro have used it for finding pizza chefs.

Despite the abuse of the programme, the minister responsible for it—Joan Burton—has defended it explaining that it has been much praised “particularly by the employers” which is hardly surprising given that they are the main beneficiaries.

Democracy is not just about voting once every four years for a short menu of parties that essentially all care about elites, not ordinary people. Real democracy involves people having a say over matters that affect their lives.

A crucial part of this is economic democracy, which means workers having a say over their work conditions and the business they work in. After all, we spend one third of our waking life at work, so that’s an important chunk of time. That’s what the Dunnes workers are attempting to do.

Economic democracy is also about citizens having a say in how the government taxes them and the corporate sector and how it spends those taxes. That’s what water charge protestors are trying to influence, just like many progressive groups around the country.

They face opposition from the established parties, who know very well that the success of those campaigns will translate automatically into a loss of power for elites and into a redistribution of power and income toward ordinary people. No wonder they’re scared and react hysterically to mild media reports that even dare mentioning the protests.