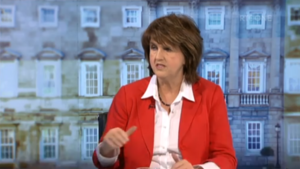 Last night, on RTÉ’s The Week In Politics,  Tánaiste Joan Burton, above, was asked about the possibility of junior bondholders in the former Anglo Irish Bank being repaid from the liquidation of IBRC.

“It is completely unlikely to happen because in the queue before the junior bondholders are the Irish people.”

Her comments came after Finance Minister Michael Noonan made comments about repaying junior bondholders in the Dáil last week.

Gavin Jennings: “Brian Lucey, good morning, who are junior bondholders? Why would they be paid? And how much could they expect to be paid?”

Brian Lucey: “They can expect to be paid around €280 million. These are people who would have put capital into Anglo Irish Bank in return for a high yield. And because of that high yield, the accepting risk and that risk would be that the bank might fail. And, guess what, the bank failed. The reason they might think they might get paid now is because the economy is picking up and particularly property prices are picking up and they do have a claim under liquidation law, under the companies and bankruptcy laws, as they stand at the moment, they have a claim if, after everybody else is paid off, there’s money left in the pot, then they will get it. Joan Burton is a little bit loose with her language there. The implication people here is, ‘oh, once again, €35billion back, we’ll get it, they might get something’. The reality is the State can only recoup a maximum of €1.1billion which is fees outstanding as part of the guarantee system, that Anglo Irish Bank didn’t pay. So there’s an issue here. The reality is most of the people involved here are not the credit unions, the pension funds, etc, that had money with Anglo Irish Bank in this junior debt, they’re people, they were sold because they couldn’t hold on to it, they were junk bonds. They were bought up by vulture capitalists who are now expecting, having paid 2c, 3c, 5c, 10c on the Euro to get 100c back.”

Jennings: “So these are people who wouldn’t initially have been bondholders in Anglo?”

Jennings: “They would only have become so in the last couple of years, yes?”

Jennings: “Now when Joan Burton says that the people of Ireland come ahead of junior bondholders, is that true in terms of..”

Speak over each other

Lucey: “…except of €1billion that Anglo owes us. The €35billion is not going to be recouped. In fact we’re continuing to burn €25billion for Anglo over the next 20 years and that’s a greater immorality  than this €280million. €280million is two thirds of the total stand planned for next year for capital in the health system – in other words building hospitals. [Finance Minister] Michael Noonan should have stood up, in my opinion, and said, ‘Under absolutely no circumstances, whatsoever,  will a penny ever be paid out to these people’.

Jennings: “But what he did explain in the Dáil last week was, and you might be able to parse this for us, that the sale of loans assets so far has gone – I’m paraphrasing here – better than expected. So that all the people who were owed money would be written to, there would be ads put out, a deadline put and anybody, essentially, who was entitled to their money back, who wanted their money back would get their money back.”

Lucey: “That is what he said but I think that it’s economically unwise, politically foolish and morally reprehensible for these people.”

Jennings: “But there’s no precedent of us having done otherwise, so far?”

Lucey: “Well of course there isn’t – this government has been buckling all along under the mildest pressure from Anglo or people related to Anglo and, you know, it flabbergasts me and I think others that they would even contemplate this as opposed to saying, ‘get up the yard’.”

Jennings: “But without a precedent so far, why would they change their minds now?”

Lucey: “Well they won’t, so they’ll do this if they have to, if they think they have to. They could walk into the Dáil tomorrow and they could change the bankruptcy and liquidation laws. It might be that people would then, in the fullness of time, take a legal case against the State. The State should defend that to the hilt. They should run this clock out as long as is necessary. The State’s resources are ultimately, infinitely greater than anybody who bought these bonds at 7c on the Euro and who are now trying to get 100c back. And they should not ever pay these people. It is, fundamentally, it’s not an economic issue for me, it’s a moral issue.”

Jennings: “There’s also a legal issue though isn’t there…”

Lucey: “He’s technically correct, which is the best kind of correct when you want to do something unpopular. Look, we are a sovereign nation and we can make a decision to do pretty much anything we like. People can then take legal action, if they wish, and in the fullness of time, the Irish and the  European courts say you must pay this, if that’s 20, 30, 40, 50 years down the line then that’s fine. But it would be incomprehensible that in the time, when last night, when people were sleeping in sub-zero temperatures on the cities and towns of this country, that we would think of doing anything like this. It’s not an economic issue, it’s not a legal issue for me, as a citizen of this state, it’s a moral issue and we should, as citizens, take a moral perspective. Economics and finance got us into trouble and got the rest of the world into trouble because we lost sight of the fact that it’s a moral issue. Adam Smith, the founder of modern economics, was not just an economist, he was a moral philosopher.”

The Week In Politics (RTE)