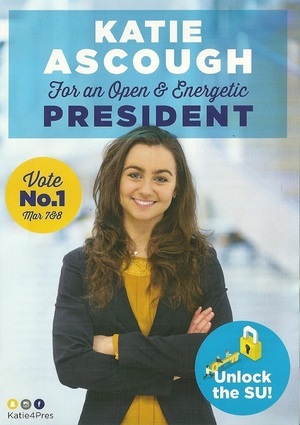 Kathleen McNamee and Dominic McGrath, in The University Times, reported on the impeachment of UCD Students’ Union president Katie Ascough.

Ms Ascough is the daughter of Tom Ascough, who sits on the Iona Institute’s board of directors.

The result follows two days of voting which saw thousands of students participate. Today’s vote saw one of the highest voter turnouts the union has seen in recent years.

Ascough came out defiant in her speech following the vote. “I fought the good fight. I have been open and honest. I have respected the law”, she said. While she offered something of an olive branch to her former UCDSU colleagues, she didn’t apologise for her actions.

Universities, she said, cannot function without “respect for those with different beliefs”. Such rhetoric was a mainstay of the campaign, with Ascough pitching the vote as a battle for democracy and freedom of speech.

In her speech, after a long night of disappointment for her supporters, Ascough seemed to suggest her defeat tonight might be something of a catalyst for change in Irish universities. “I hope we can build an atmosphere of inclusion to those who might not fit the stereotypical image of an SU president”, she said.

…Through the twists and turns of a campaign that seemed surreal at times, many have suggested tonight’s vote was something of an early indication of what a repeal referendum might look like in 2018.

…With over 1,200 signatures, the petition to trigger the referendum was submitted three weeks ago. It was started after Ascough removed abortion access information from the UCDSU freshers’ guide, Winging It. The move was seen by the pro-impeachment campaign as undermining the union’s pro-choice mandate. The campaign also objected to the €8,000 cost of reprinting.