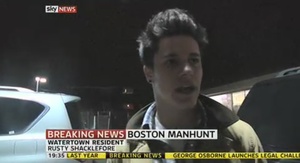 WE don’t wish to make light of a senseless tragedy.

Sky News has been showing a clip of an interview with this witness called Rusty Shaklefore about the Boston Bombings. Anyway, I’m a bit of a King of the Hill fan and Rusty Shakleford was an alias used by Dale Gribble the conspiracy nut.I don’t think anybody has copped on to it at Sky News. It’s been on a loop since 6am. Well, that’s what we tell ourselves, isn’t it Boomhauer?