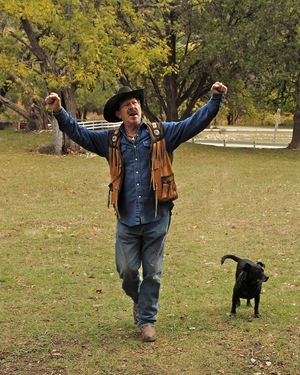 We have two PAIRS of tickets to see Kinky Friedman (above with Mr Magoo) on Sunday in Whelans, Camden Street, Dublin.

Kinky is singer, satirist, known as the Jewish Cowboy, with a career (taking in Bob Dylan and The Texas Chainsaw Massacre) and political path as weird and varied as the lone star state.

The First TWO to correctly translate in IRISH (using fadas) the toast Kinky makes at the start of the video of Nashville, Casuality and Life (above) wins the tickets.