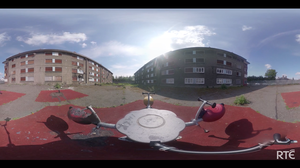 Myself and a colleague in Prime Time, Conor Wilson, made a short online-only piece with some of the last residents of the O’Devaney Gardens flats complex, there’s only a few residents left living where there were once more than 270 families. Most of the flats have been boarded up or demolished. They talked to us about life and the history of the flats.

It was shot with a 360-degree camera, so viewers can look around the flats and get a perspective on the place that isn’t quite possible with normal flat-screen video.

If people open it in the YouTube or Facebook apps on their phone, the phone will act like a window onto the picture, so they can move their phone to pan around, or swipe the screen to move the shot…