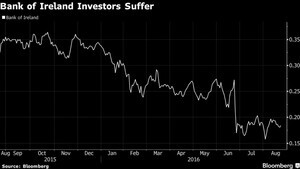 “Ireland’s banks are facing an unusual problem: hardly anyone seems to want a mortgage from them.

Allied Irish Banks Plc said home loans were the slowest growing part of its Irish lending in the first half, while Bank of Ireland issued more than double the amount of new mortgages in the UK. than in its home market.

About 60 percent of homes in Ireland are being bought without a mortgage in recent years, up from 25 percent a decade ago, the central bank said in July, indicating a sharper drop in the market for home loans than analysts expected.”…

“Given weak lending margins and slow growth, banks must find new ways to increase revenue. Bank of Ireland plans to charge some corporate customers 0.1 percent to hold their deposits, a person with knowledge of the matter said last week.

While banks normally turn to fee-based businesses to boost income, regulation makes that difficult in Ireland.

“Ireland is one of very few developed countries where the fees the banks are allowed to charge for those products are regulated,” says Davy’s Sheridan. “Every time they want to bring in a new product, it has to be approved by the regulator. Therefore their ability to levy charges for services is quite difficult.””