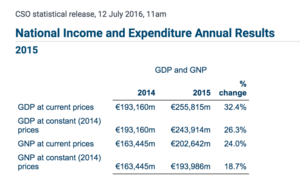 The Central Statistics Office is a reputable and professional State agency that adheres to best practice and complies with all relevant EU statistical compilation and reporting standards.

It is doing its job and the messenger should not be shot.

The issue seems to be more with the relevant EU statistical compilation and reporting standards.

It appears that this week’s anomalous and ridiculous GDP figure was attributable mainly to Irish-domiciled multinationals executing one-off transfers into the State of the book value of valuable assets such as commercial jetliners and intellectual property.

If these asset transfers were one-off events (which by definition are no indicator of the robustness or otherwise of the Irish economy), then why are they a component of GDP in the first place?

If they were indeed one-off, does this mean that next year our national debt/GDP ratio will oscillate back from this year’s 80 per cent toward 90 per cent again?

While the debt/GDP ratio is only one of many debt-related financial metrics, it has a high public profile and it is used not only by the Government as an input for medium-term financial planning but also by EU financial regulatory bodies and sovereign credit ratings agencies.

If such a significant planning and monitoring metric can be so distorted and discredited by anomalous events, should it not be replaced, or else have the once-off events excluded from it?

Truly there are lies, damn lies and statistics.