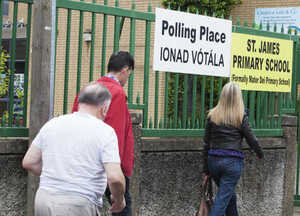 Have we come over all ‘liberal’?

Or something else entirely.

Did we see the emergence of a new voting pattern in Irish politics or did the familiar liberal–conservative divide raise its head once more?

Eyeballing the data certainly suggests the latter. Long-standing liberal bastions on the southside of Dublin were once again to the fore in voting

Yes, while the ten constituencies with a Yes vote lower than 55 per cent were the traditionally most conservative ones, in the west and north-west. Dublin voted 71–29 in favour while in the rest of the country it was a rather closer 59–41.

A more systematic analysis confirms this.

Comparing the percentage Yes votes on 22 May with those cast in the divorce referendum of 1995 produces a Pearson correlation (r) of 0.87, a remarkably high figure given the twenty-year time difference. (Constituency boundaries have changed since 1995, but by amalgamations we can identify 39 more or less comparable units.)

The largest ‘swings to liberalism’ were in traditionally conservative areas – Limerick West with a shift of 27 per cent, Cork NW and Cork E head the list – while the smallest swings were in relatively liberal areas (Dublin NE, Dun Laoghaire and Meath all saw the liberal vote grow by less than 5 per cent compared with 1995.)

In short, votes were cast very much along the established liberal–conservative dimension, with the liberal side now decidedly in the ascendant….

The fact that many Mass-going Catholics voted ‘yes’ (a substantial minority probably) is indeed a reality check for the Church.

The reality check is that the Church has done almost no catechesis in the area of marriage for years and years. It has done lots of pastoral counselling, but it has not taught on a systematic basis what marriage is and why it is so important to society and why it can only be between a man and a woman by its very nature.

It has not explained why this is not “exclusionary” but in fact protects the very basis and rationale for the institution.

The failure to teach in this way is why many Catholics were bowled over when the referendum came, especially as they have been subjected by the media to such relentless propaganda in favour of gay marriage for years.

Now that the referendum has been carried it is more imperative than ever that the Church teaches very clearly on the issue of marriage. It will need to contrast its belief about marriage with the State’s new version of marriage and make crystal clear to people why it believes what it believes.

The Church must always teach what is true both in season and out of season. Its teaching on marriage is now out of season. So be it. It must teach it all the same..

A ‘reality check’, but which kind? (David Quinn, The Irish Catholic)