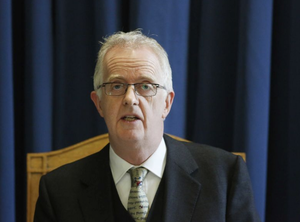 It heard how significant documents that should have been in a social work file concerning Sgt Maurice McCabe – when it was given to a specific social work review team – were not in the file.

This team was given the file to review as it was tasked with assisting Tusla’s legal team in responding to Sgt McCabe’s solicitor, after he became aware of the false rape allegation levelled against him.

The significant documents were in the file when it was given to the tribunal’s investigators.

At the tribunal yesterday, Tusla social worker Lisa O’Loghlen, who was unable to give evidence in respect of Sgt Maurice McCabe earlier this year, gave evidence.

Readers will recall how, in the summer of 2016, the Sexual Assault Response Team was set up in response to the number of retrospective allegations which were unallocated and on waiting lists, awaiting an allocated social worker.

Readers will recall Sgt McCabe’s flawed case was such a case.

The tribunal has already heard how a complaint by a Ms D in December 2006 came 11 months after her father, a guard, Mr D “lost his position and was reverted to other duties” after Sgt McCabe “caused the institution of serious disciplinary procedure against” Mr D in January 2006.

Readers will recall how Ms D’s 2006 allegation resurfaced during a counselling session seven years later in the summer 2013, in Cavan, with RIAN counsellor Laura Brophy.

Then, readers will recall, on April 30, 2014, Laura Connolly plucked Sgt McCabe’s file randomly from a cabinet which contained unallocated cases and sent a notification of Sgt McCabe’s file to the gardai even though she was aware the 2006 allegation had already been sent to the gardai and DPP had ordered for no charges to be brought.

Ms Connolly made a monumental error by combining both the 2006 allegation, which was found to have no foundation by the DPP, and the 2013 allegation of rape pertaining to a Ms Y which had nothing to do with Ms D but was wrongly recorded by counsellor Laura Brophy as an allegation Ms D was making against Sgt McCabe.

The tribunal has already heard that social worker Clair Tobin was allocated Sgt McCabe’s case in August 2016 – some eight months after Kay McLoughlin, of Tusla, sent Sgt McCabe a Barr letter (a letter which notifies an alleged abuser of the allegation made against them) in December 2015 which stated Tusla was investigating Sgt McCabe in relation to the false allegation of rape.

This Barr letter was sent after Ms McLoughlin’s superior Gerry Lowry – who knew this allegation was incorrect – failed to open an email attachment which contained Ms Loughlin’s draft letter containing the false allegation in May 2015.

Readers will recall that Sean Costello, SC, for Sgt McCabe, wrote back to Ms McLoughlin to say the allegation was wholly untrue in January 2016 but Tusla did not respond to Mr Costello until June 20, 2016.

In July of this year, Ms Tobin told the tribunal that, on June 27, 2016 – seven days after Tusla finally responded to Mr Costello – she and her co-worker, Lisa O’Loghlen, met with Michael Cunningham, who was the then duty social work team leader in Cavan, and he gave them a number of files and a synopsis of the files.

Ms Tobin told the tribunal that the file did not contained the Garda notification which was made in respect of Sgt McCabe by Laura Connolly in 2014.

Readers will recall Ms Tobin told the tribunal she didn’t know of the Garda notification until RTE’s Prime Time aired the matter in February 9, 2017.

In addition, Ms Tobin said the files she was given didn’t make clear that the DPP had instructed no prosecution on the basis that no criminal offence had taken place.

After Ms Tobin’s evidence about the file’s missing documents, Kay McLoughlin, who had “custody” of the file before it was sent to SART, made an additional statement to the tribunal, stating:

Ms O’Loghlen confirmed that there was no Garda notification on the file that she and Ms Tobin reviewed for SART.

Because of this, her review of the file does not mention the 2014 referrall at all.

Patrick Marrinan SC, for the tribunal had the following exchange with Ms O’Loghlen:

Marrinan: “Do you believe that there had been an interference with the file and that these documents had been revolved so that you wouldn’t have sight of them?”

O’Loghlen: “I don’t see why it would have made — I think it’s more that they weren’t put on the file in the first place. That would be my — but I can’t say for sure.”

Marrinan: “Well, these are the only documents that appear to have been removed from the file, you understand?”

Marrinan: “So it would appear to have been something that was done deliberately, because they’re all focused on the Garda referral?”

Charleton: “Then it comes back sealed, the Tribunal gets it and lo and behold the documents you haven’t seen, which are the worst red flag of all the red flags you could come across…”

Charleton: “…are back on the file.”

O’Loghlen: “Yeah. No, I can see how it looks that way and it was very poorly managed in my opinion, from the start in 2006 right through.”

Charleton: “I know, but, you know, there’s the chaos theory and there’s a conspiracy theory.

Charleton: “The cover-up theory, you know, it has to be supported by something before you reach that conclusion. But in the event that the worst thing that happened is not on the file when you’re reviewing it in your professional capacity.”

Charleton: “And reviewing it competently, I think everybody accepts, that suddenly when the file is sealed, it reappears on the file.”

Charleton: “It’s kind of hard to reach the conclusion isn’t it…”

Charleton: “..that somehow these documents were lost, all about the same thing, and suddenly come back in the right order in the file. That’s the problem. I don’t know whether you would like to comment on that. That was the whole purpose of Mr. Marrinan’s questions.”

O’Loghlen: “I can absolutely see how it looks that that is the way that it happened, yes. I just can’t point a finger at any individuals in particular.”

Charleton: “So, I mean, so your view is it looks like a cover-up but you can’t say who was doing the cover-up.”

O’Loghlen: “Yeah, because if they’d been on the file I absolutely would have reported on them, and that’s why I’m so sure that they weren’t on the file.”

Charleton: “And do you think it was a cover-up?”

O’Loghlen: “I don’t think that there is a — between Tusla and the guards no. I do think it was poor management and incompetence.”

Charleton: “Well, I mean, if anybody makes a mistake, I mean it’s hard to own up to it, but sometimes one also can cover oneself in paper or remove the paper…”

Charleton: “…that shows the mistake.”

O’Loghlen: “That there was a cover-up?”

Charleton: “But you can’t say who may have…”

Under cross examination from Paul McGarry SC, for Sgt McCabe, Ms O’Loghlen said that had she learned of the file’s missing documents before she drew up her report on the file, she might have inquired why they weren’t on the file and asked who had been responsible for the missing documents at the time.

The public sittings of the tribunal are not expected to resume until mid/late November.

Previously: ‘I Don’t Know If It Was Through Intention. I Can’t Explain It’