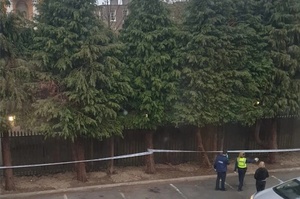 Members of the Gardai at the scene where partial skeletal remains were found at Lissenfield Lower Rathmines Road, Dublin 6. Home of former Fine Gael leader and army general Richard Mulcahy, Lissenfield was developed into an apartment complex in 1988.

Further to the discovery in early April of partial human remains – believed to be those of someone aged between five and 20 years old – by workers clearing common ground at Lissenfield, Lower Rathmines Road, Dublin 6….

“The remains have now been positively identified. Gardaí are continuing in attempts to contact family members. No further information is available at this time.”