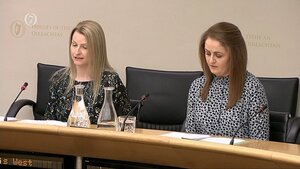 Two civilian officers in the gardaí’s statistics unit Lois West and Laura Galligan told an Oireachtas committee that the misclassification and inaccurate recording by gardai of crimes and homicides left some women at risk of domestic violence.

The force’s Chief Administration Officer Joe Nugent told the Oireachtas justice committee that the women’s information was “reliable and accurate”.

Senior gardaí have said the evidence from two civilian analysts over inaccurate homicide statistics was “reliable and accurate”.

The force’s chief administrative officer, Joseph Nugent, told the Oireachtas Justice Committee this morning that there were “concerns” about the way the two female civilian staff had been treated.

…Questioned this morning, the force’s chief administrative officer said it was “worrying” the way the two analysts had been treated.

Both he and the acting garda commissioner Dónall Ó Cualáin, who is out of the country, had “concerns” about their treatment, the committee was told.