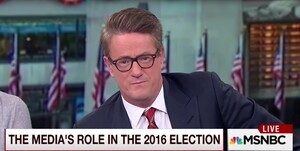 MSNBC’s Joe Scarborough reflects on the self immolation of the mainstream media during the US Presidential Election.

“When the conventional wisdom is wrong this often, we really ought to take pause. It’s a sign that those in charge of reading the world for us aren’t reading it right. It’s like they’re speaking the wrong language.

It’s one thing to call an election wrong here or there. But to do it again and again should have alarm bells ringing very loudly in newsrooms, in academia, in the corridors of power generally.

It is simply not good enough that almost all of our pundits, researchers, presenters, producers and ‘experts’ are clearly so out of tune with so many voters. It’s one thing to call elections wrong, but what makes it worse, and obviously contributes to all those wrong calls, is that the ‘experts’ are indeed so out of tune and so out of sympathy with so many voters. Worse than that, they have huge contempt for huge numbers of voters”

‘Conventional wisdom’, based on contempt for voters, got it wrong (David Quinn, Irish Independent)