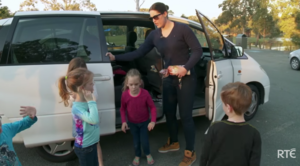 Making it Down Under.

On tonight’s episode viewers meet Rosie Nolan, a Waterford woman working in the Australian police force who is also a mum of seven.

Rosie (27) travelled to Australia at the age of 18, having had her application to join the Gardaí turned down with the advice to go and get some life experience before trying again later.

She arrived in Australia as a backpacker, eventually joined the Brisbane Police and never looked back. Nine years later, she has seven children and lives happily in the suburbs with her wife Natasha.