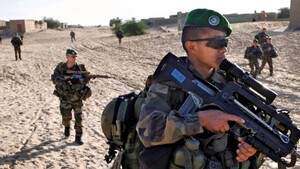 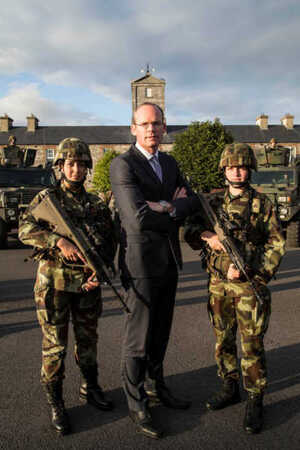 Ireland is expected to send a contingent of peacekeeping troops to Mali to allow France to deploy troops elsewhere.

But, argues Ryan McCarrel, the risk to Irish lives and Irish neutrality must be known.

Irish Defence Minister, Simon Coveney, has recently told The Independent that sending a large Irish troop contingent to Mali, in support of the ongoing French military operation there, is the government’s most likely response in the wake of the terrorist attacks that struck Paris last week.

His announcement comes after the French government’s invocation of Article 42.7 of the Lisbon Treaty on Tuesday that directs European Union member states to provide aid and assistance in the event of an attack on another member.

EU defence ministers are to meet today [Friday), and are expected to make several important decisions about how to do so. Yet sending a contingent of Irish soldiers to Mali is not a decision that should be taken lightly.

Mali has been embroiled in conflict since March 2012 when an armed Tuareg rebellion in the country’s north left the military embarrassed, leading to a coup that overthrew the elected government of President Touré.

The ensuing political crisis was seized upon by the Tuareg rebels in the north who quickly allied themselves with a radical Islamist group known as Ansar ed-Din in order to solidify control over the northern part of the country.

After declaring an independent state of Azawad, the Tuareg rebels with the support of several radical jihadist groups, including Al Qaeda, advanced southwards overtaking large parts of Malian territory as they went. French forces intervened in 2013 and pushed back their advances in conjunction with government forces, eventually retaking control of all of Mali’s major cities.

Though the situation is now relatively stable in comparison to Syria, attacks in Mali are still common and are often directed at UN and French peace-keeping forces.

In the last few months more than two dozen attacks have been carried out against humanitarian organizations alone.

The most recent of which happened just last week when an explosive device was detonated outside the entrance of non-government organization. Indeed, the fragile peace-deal brokered earlier this year might be in danger of falling apart completely.

In a video released earlier this month, Iyad Ag Ghaly, a radical jihadist most likely operating in Mali’s North, denounced the deal, saying the groups who signed it were ‘secular’ and accused them of ‘treason.’

In the video, he instructs his followers to answer Charlie Hebdo’s caricature of Mohammed with “your explosive belts, your remote-controlled charges and your booby-trapped devices.” His threatening remarks are directed as much at continuing the bombing campaign in Mali, as broadening these the campaign to include attacks abroad – and in particular, France.

It’s in this context that Minister Coveney has suggested that Irish soldiers ought to be sent to Mali in support of their French counterparts, while simultaneously vowing that Ireland would not put the lives of their soldiers at risk.

The question of course is whether the Minister can reasonably make such a guarantee for the safety of Irish soldiers – after all French forces have already suffered casualties – or whether participating in such an operation could potentially make Ireland a target of a future terrorist attack.

This is a fate the country has studiously avoided thus far with its staunch stance on neutrality and avoidance of overseas interventions. Indeed, the question should be raised as to whether the Irish defence forces are prepared to partake in counter-insurgency operations if it were to come to that, and perhaps more importantly, it must be asked whether the Irish should be involved in such a complex conflict in the first place.

Mali is a former colony of France. They have a special interest in maintaining a modicum of peace and stability there and elsewhere throughout western Africa, where they regularly intervene and have several military bases. Some have even gone so far as to suggest that France has taken on a “big brother role” in the region.

France’s colonial past is therefore a significant reason why it, and not other countries like Ireland, finds itself continually embroiled in a series of regional conflicts spanning more than 4000km from Bangui in Central African Republic, to Bamako in Mali – capital cities that the Irish would have little prior knowledge of let alone a military commitment to.

Furthermore, these conflicts have not come without high costs. Though precise numbers are difficult to corroborate civilians have been killed and wounded during earlier stages of the French operation, in addition to French soldiers, including a helicopter pilot who died in 2013. As a direct result of intervention, France has been singled-out by radical extremists like Iyad Ag Ghaly for attack.

None-the-less, Irish Defence Minister Coveney has stressed the Lisbon Treaty as the deciding factor in the matter – this despite his admission that sending more soldiers to Mali was already on the docket before the Paris attacks.

Given the current situation and the potential consequences at stake, we should be clear about what Article 42.7 does and does not require Ireland to do.

The treaty states that “if a member state is the victim of armed aggression, the other member states shall have towards it an obligation of aid and assistance, by all means in their power.” But goes on to stress that this assistance “shall not prejudice the specific character of the security and defence policy of certain member states,” notably among them, neutral Ireland.

Aid and assistance can take many forms outside of direct military intervention in overseas conflicts, including helping provide domestic security and policing in France, increased intelligence sharing, and humanitarian assistance.

In other words the treaty does not require Ireland to send soldiers abroad in the stead of French troops who are stationed there for reasons which may have little to do with European security, much less Ireland’s national interests.

If Irish soldiers are going to be sent into such a conflict, the decision should at the very least not be taken lightly or made in haste. Ireland’s long commitment to neutrality and avoidance of such operations in the past, though sometimes difficult while under pressure from its allies to ‘do more’, has paid peaceful dividends.

If Minister Coveney believes this should change now, he should make the potential risks and consequences well-known, so the public has a chance to decide whether it is the right course of action.

There is no doubt that Ireland has a responsibility to France and to European security more generally, but just how far that responsibility extends should be open for debate.

Ryan McCarrel (@ryanmccarrel) is a PhD candidate in Geopolitics University College Dublin where he specialises in NATO’s relations with its non-member states. 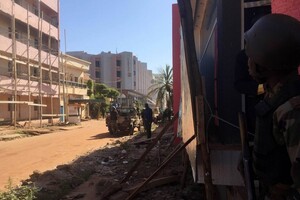 Reports say 170 people have been taken hostage at the Radisson Blu Hotel (above) in Bamako, Mali’s. capital.