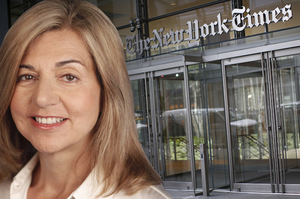 The interview was conducted before former President Mary McAleese sent a letter to the newspaper, saying it “should be hanging its head in shame” over the article.

Margaret Sullivan: “Well I think the first thing that happened was the New York Times ran a short of brief and sort of to-the-point news story online, on Tuesday about this tragic and really terrible event that happened in Berkeley, California. After that, as I understand it, editors and reporters felt that they should develop the story in some way and looked for a different kind of angle and the angle that they ended up deciding on was this idea of looking more deeply at the J1 programme and that’s what ended up being this very controversial and very much criticised article and I think the criticism is completely valid.”

Laura Whelan: “A lot of people, Margaret, in Ireland, have been badly offended by this article. Can you understand these feelings?”

Sullivan: “Yes, absolutely, I completely understand where the criticism is coming from. I wrote a post today [yesterday] in something called the Public Editors Journal that said you know I understand the criticism, I called the article insensitive and, even though I can’t apologise on behalf of the Times because, as Public Editor, I only actually express my own, independent opinion, I did say that I personally was very sorry that so much pain was caused by this.”

Whelan: “Margaret, a Government minister here in Ireland [Aodhan Ó Riordain] has accused the New York Times of victim blaming. Would you agree with that stance?”

Sullivan: “There is an element of victim blaming in this article but I believe it was inadvertent. I know, for example, the lead reporter on the article – whose name is Adam Nagourney – he’s a very good reporter, he’s a very solid fellow and I’ve had a lot of correspondence with him today [yesterday]. He feels terrible about this. I think he feels that he essentially made a mistake.”

Whelan: “What changes will be made to the article now? It’s  still available, up online.”

Sullivan: “Yes. The article is pretty much as it was to begin with. Mr Nagourney said that he made some, small changes before it went to print. But the Times’s policy is not to unpublish something once it’s been published and to keep the archive version of it pretty much as is. So I’m not expecting it to be taken down or, as we say, unpublished.”

Whelan: “I understand what you’re saying about the New York Times’ policy on that but I suppose given the level of feeling here in Ireland and the fact that the New York Times has now received a letter actually from Ambassador Anne Anderson, do you think this would maybe be an incident where perhaps the New York Times should go against its own policy and withdraw this article, take it down offline?”

Sullivan: “I don’t, again I want to sort of say, that I can’t speak for the paper, about that, all I can tell you is that, in my experience, that just never happens. I mean there can be criticism and there can be apology, there can be an acknowledgement but the story pretty much stays as is.”

Whelan: “In terms of the level of complaints received Margaret and, you know, the involvement of an ambassador, and also a Government minister here in Ireland, can you remember any other article, you know, going back a couple of years in the New York Times, that caused this much upset?”

Sullivan: “There certainly has been a great deal  of complaint and many, many emails and, as you say, official ones. I’ve had, I’ve been in the role of Public Editor for coming up on three years and I would say it’s among the ones that I’ve had the most complaint and response about. But, you know, perhaps not at the very top of the list.”