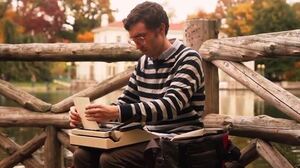 You may remember Mark Cersosimo, who created the charming film in New York called This Is My Home in 2012.

I just wanted to let you know that I’ve just released a new short film called The Roving Typist, and it’s about a man who roams the parks of NYC with a typewriter, typing stories for strangers.