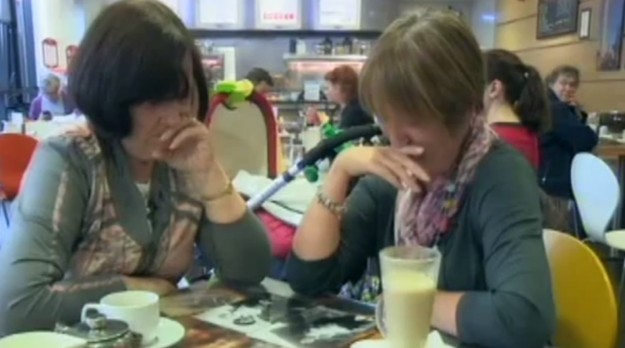 Mary Merritt, who spent 14 years in the High Park magdalene laundry in Drumcondra, Dublin, with her daughter Carmel, top – whom she found 40 years after Carmel was born – on BBC’s Newsnight, above, last night

During her segment, she spoke to gravedigger Barney Curran, who was hired by the Sisters of Our Lady of Charity nuns to dig up the remains of what the nuns then believed were 133 magdalene laundry workers at the High Park Laundry in Drumcondra, Dublin, in the early 1990s. At the time, the nuns were selling the land to developers.

Ms Lloyd Roberts also spoke with Mary Merritt, 83, who was born in a mother and baby home and sent to an orphanage. One day she stole an apple from an orchard because she was so hungry. After this she was sent to High Park laundry where she remained for 14 years. While there, she was tasked with laying out the women who died at the laundry.

In the BBC report, Ms Lloyd Robert reported that Ms Merritt told former Senator Martin McAleese – author of the McAleese Report – how, one day, she broke a window and ran away from the laundry. She went to a priest and begged for help. The priest raped her before giving her sixpence. The gardaí then brought her back to the laundry. Ms Merritt became pregnant as a result of the rape. Her daughter, Carmel, was taken by the nuns and put up for adoption. For 40 years, Ms Merritt only had a photo of her daughter.

Ms Merritt’s testimony of her rape is not included in the McAleese Report.

Ms Merritt and Ms Lloyd Roberts went to visit the headquarters of the Sisters of Our Lady of Charity where Ms Merritt pleaded for an apology but didn’t receive one.

During the report, Ms Lloyd Roberts also interviewed Tánaiste Joan Burton. Mr McAleese turned down her request for an interview. 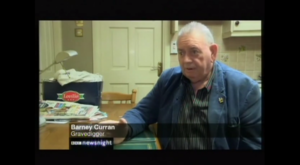 “The nuns were trying to sell the place there and it was big money like so they didn’t want anyone to know what was going on, it was all hush-hush. We were supposed to tell no-one about it.”

“We kept digging and digging until we dug out the whole lot and we ended up with 22 more than they knew were there…they didn’t even know they were there.”

“[We also found] a lot of plaster of paris which was on their wrist and in their arms, their legs, their feet, their ankles, there were broken arms and broken legs, as far as, it seemed to me like. The women were too small and too frail for that kind of work.” 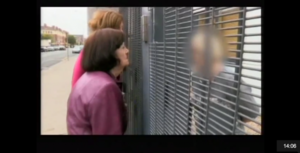 Ms Merritt and Ms Lloyd Roberts at the gates of the headquarters of the Sisters of Our Lady of Charity:

Lloyd Roberts: “Good morning, my name is Sue Lloyd Roberts, I’m here from the BBC and this is Mary Merritt, a former magdalene laundry worker.”

Unidentified representative of the order: “You’ve already sent in a request and I think you’ve got your answer to that request.”

Lloyd Roberts: “No, we’ve been refused an interview but we have some very important questions to ask.”

Merritt: “All I wanted, please, somebody to give me an apology for what happened to me. That’s all I wanted.” 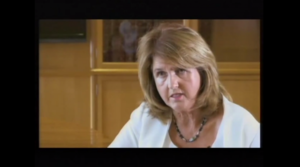 Lloyd Roberts: “When I speak to these women what they want is the truth to be told.”

Joan Burton: “Well, we now have underway the process of preparing a full judicial report by a very experienced judge who has been involved in a  number…”

Lloyd Roberts: “So you admit the McAleese inquiry was less than thorough?”

Burton: “Well, the McAleese inquiry was an inquiry at a point in time. I think that the critical thing that it achieved was recognition for what women had experienced and what women had gone through.”

Lloyd Roberts: “But the women themselves say it didn’t, for example, the glossing over the abuse, the duration of stay?”

Burton: “Well, I do know that what is important for a lot of the women is that they would receive a redress payment.”

Readers may recall how Mary Merritt was on Prime Time on February 5, 2013 – about two weeks before Taoiseach Enda Kenny issued a State apology to the magdalene women – when she begged for an apology from the Labour TD Kathleen Lynch, who was in the studio that night.

Ms Merritt didn’t get an apology then either.