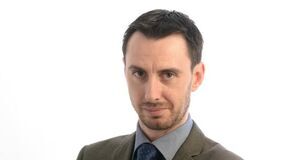 Mark Paul, of The Irish Times

You may have read an opinion piece about feminism in Wednesday’s The Irish Times by the newspaper’s business affairs correspondent Mark Paul.

Full disclosure: we have some ‘previous‘.

Carelessly entering a Twitter debate on feminism or sexism as a straight, white male can be a hazardous thing. It’s a bit like wandering into a coop full of angry chickens who have armed themselves with machine guns. They riddle you with bullets, then spit on your corpse and call you a nasty fox.

…Everybody, even the most ardent feminist, knows that most men aren’t lecherous, drooling, breast-grabbing misogynists. That is not the point, they will tell you: all women have been subjected to some sort of unwanted male attention in a pub or at work or while walking down the street. This is probably true to varying degrees. And that is lamentable.

Some feminists clearly espouse that all men are complicit in this activity or are responsible for it in some way, whether or not they engage in it. You may not have slapped any backsides or pulled any bra straps, but you’re a man, the orthodoxy goes, and your collective predilection for dirty jokes causes other men to harass women.

You’re not supposed to object to this stupid proposition. Not if you’re a man. If you do, you’re derailing the debate and bringing the focus back on to your own sorry, privileged self. It’s not about you, Mr Man. It’s about women. Right?

And lo it is come to pass. The hero prophesied in the ancient texts (written by men) stands among us. And as foretold he has raised his voice on high, and standing firmly upon the pinnacle of Mount Irish Times, with his cloak of privilege and probably his pendulous and prodigious testicles flapping in the breeze, he has bravely declared the utterly heartfelt, unique and never before spoken message: “Feminism, you’re doing it wrong.”

Can you feel his compassion for the many female victims of sexual assault and intimate partner abuse?

Can you feel his anger towards the perpetrators of these abuses?

Can you feel his frustration with the unequal representation of women in nearly all areas of governance and social structures?

Can you feel how tenderly and respectfully he reaches out to communicate this to his sisters?

Can you feel his unquenchable desire to work tirelessly to right these wrongs?

I see what I always see when a man cries crocodile tears for the state of feminism. I see a bruised ego that instead of fighting the real and urgent battles I mentioned above would rather fight the rising oppressed under a false flag of friendship.

A two-faced troll with the privilege to view all this as a game of internet argument and semantics. Someone who unconsciously or otherwise understands that equality means the erosion of the unearned privileges he enjoys as a man.

And this is a scary thought; I mean who wants to just give all that up for nothing. It’s pretty sweet after all. But they’re not a monster. They also believe in equality (in an abstract way). So how do they solve this?

I’m sure you’ve met many. They don’t actually want equality. But they can’t admit to themselves that they don’t want equality so they instead take up an unimpeachable position as high-minded, truly objective crusaders for and experts on equality.

Then strangely, they set their sights on what to them is the most important work someone in their position as a high-minded, truly objective crusaders for equality can do; they fight against feminism.

Not patriarchal systems. Not an archaic and ineffectual legal system.

Do you see how clever this is? If you define the rising power of the oppressed as the true enemy of equality then you get to fight it instead of what’s actually causing the inequality.

And by doing this you are also ensuring that you can all the while in clear conscience hold onto your sweet little male privilege.

Even in the Irish Times.