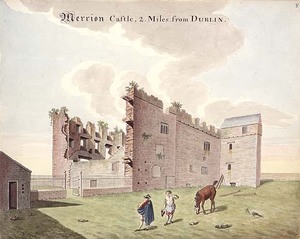 They ate a child.

They sucked the cows.

Further to the brown rat discovered by Nick Moran on Monday.

[Which, we gather, sadly died from injuries inflicted during an incident involving a Dunlop putter on Tuesday]

Readers might be interested to know that the brown rat is a relatively recent arrival in Ireland.  It first turned up in Dublin round 1722 or so, most probably via a Russian ship from the Baltic, and within a mere seven years had succeeded in causing fear, terror and consternation among the city’s inhabitants, as outlined in this extract from Walsh’s Imperial Newsletter, 1729:

“This morning we have an account… that a parcel of those outlandish Marramounts which are called Mountain Rats, which are now here, grow very common; that they walk in droves and do a great deal of mischief …. ate a woman and nurse child in Merrion. People killed several who are as big as Katts and Rabbits. This part of the country is infested with them. Likewise we hear from Rathfarnham that the like vermin destroyed a little girl in the Field; they are to be seen like rabbit, and are so impudent that they suck the cows …”

It appears that the brown rats were driven back to the ruins of Merrion castle (pic above, just across from what is now Merrion Gates) where they holed up for a number of years before either dying out or diminishing in size. See cupboard rat for details.