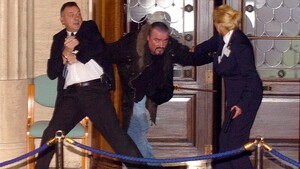 Stone has been in prison since an attack at Stormont in 2006, when he was found guilty of attempting to murder Sinn Féin members Gerry Adams and Martin McGuinness.

Stone had previously failed in a bid to get his conviction overturned, claiming the incident was “performance art“.
He will now serve the 18 years remaining on his 30 year sentence for the Milltown attack, after he completes his 16 year sentence for the assassination bid on the nationalist politicians.