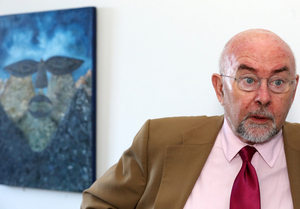 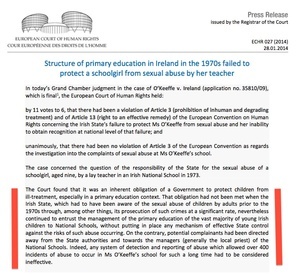 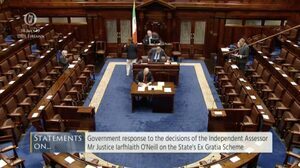 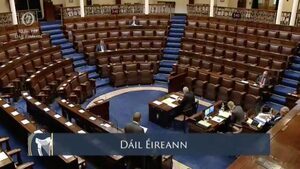 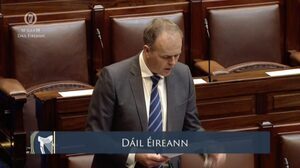 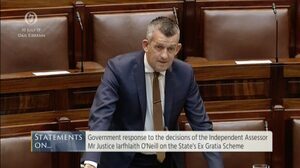 Minister for Education Joe McHugh gave a statement to the Dáil in light of Mr Justice Iarfhlaith O’Neill finding earlier this week that the State misinterpreted a 2014 ruling by the European Court of Human Rights.

The ECHR ruling was in respect of Louise O’Keeffe who was abused by her primary school principal in the 1970s.

It’s been 21 years since Ms O’Keeffe first made contact with the Department of Education about her abuse, the Dáil heard.

Ms O’Keeffe took her case to the ECHR after the Supreme Court upheld a High Court decision to dismiss her claim that the State/Department of Education was liable for her abuse.

The State’s misinterpretation of this ECHR ruling led to survivors of child sex abuse in schools being denied access to compensation via an ex-gratia redress scheme – the maximum of which is set at €84,000 per person.

The State maintained the ruling meant only victims who could prove they were abused after an initial complaint was made against a teacher and no action was taken were entitled to redress.

But Mr Justice O’Neill found this was not the case.

It’s understood there are 360 known victims but Mr O’Neill was only tasked with examining 19 specific cases – ruling that 13 should be paid under the scheme while a separate avenue should be found to pay compensation to the other six survivors.

During his speech this morning, Mr McHugh made it clear that 13 of those 19 will be paid compensation “as a matter of priority”.

And what the others?

He said he met the Attorney General Seamus Woulfe yesterday and that he hopes to bring a memo to Cabinet next week outlining the Government’s response to Mr Justice O’Neill’s findings.

Meanwhile, several TDs asked questions of Mr McHugh including Limerick TD Maurice Quinlivan, of Sinn Féin, who has met with a number of victims in his own constituency.

He asked the minister to explain to the Dáil who came up with the “prior complaint” requirement.

He also asked if Mr McHugh and his department will publish the advice it got after the 2014 ruling to say that “prior complaint” was required to access the redress scheme.

Mr Quinlivan said he was asking the latter question because he believes there was no such legal requirement.

“The European Court of Human Rights took a different view to the view of the High Court and the Supreme Court, and the specific issue of liability, for sexual abuse of schoolchildren in the landmark case taken by Ms Louise O’Keeffe.

“The European Court of Human Rights found in the facts of that case that the State did have a certain responsibility for historic abuse.

“The European Court of Human Rights judgement is complex and lengthy and runs to some 80 pages.

“What is clear is that some people who were abused in day schools discontinued cases against the State before the judgement in respect of Ms O’Keeffe’s in the European Court of Human Rights.

“Some of those cases involve the State being joined in actions that survivors had taken against school authorities, including religious congregations.

“The ex-gratia scheme was established to provide a mechanism to address the situation of these people.

“The criteria of the scheme reflected the State’s interpretation of the ECHR’s judgement, among other things – that there must have been a prior complaint to abuse to a school authority.

“I acknowledge, as a matter of fact, that this proved to be too difficult a hurdle for applicants to cross. Put simply: the scheme did not work.

“The result is that close to half the people who applied to the ex-gratia scheme subsequently applied to have their case reviewed by the independent assessor to the scheme – retired High Court judge Mr Iarlaith O’Neill.

“Judge O’Neill has ruled on those 19 applications. He has formed the view that the requirement for a survivor to secure evidence of a prior complaint is not consistent with the European Court of Human Rights’ judgement.

“As a result, 13 people are entitled to a payment – this will be paid as a matter of priority.

“In response to the assessor’s decision, the Taoiseach announced in the Dáil yesterday that the ‘prior complaint’ criterion would be dispensed with and the scheme would be reopened.

“My department, in conjunction with the Office of the Attorney General is examining the scheme in light of this.

“I met the Attorney General Seamus Woulfe yesterday, to discuss the next steps and the process and I hope to be in a position to bring a memo to Cabinet next week outlining the Government’s response.”

Mr McHugh, of Fine Gael, became the Minister for Education in October 2018, taking over from his party colleague Richard Bruton who held the role from May 2016.

When the ECHR ruling was made, in January 2014, Labour’s Ruairí Quinn was the Minister for Education until July of that year, when his party colleague Jan O’Sullivan took over the role.

Yesterday: “Anybody Who Suffered Abuse In That Defective System Was Failed By The State In The Same Way”