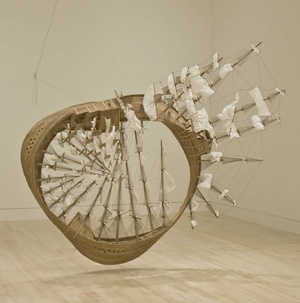 Named after a nineteenth-century astronomer and mathematician, the Möbius Strip is a surface that has only one side, and exists as a continuous curve.

The title is a witty play on Herman Melville’s novel Moby Dick, which famously relates the tale of a ship captain’s all-consuming obsession with an elusive white whale. The ambitious and imaginative structure of Hawkinson’s sculpture offers an uncanny visual metaphor for Melville’s epic tale, which is often considered the ultimate American novel.