Sausage-bodied with the face of a Lab .

Further to The Dress….Rocco looks like a Labrador when he is sitting down but he has the body of a Dachsund! He doesn’t have image issues, obviously. No need for Photoshop for Rocco….

The back issues of Mongrel have found a loving home: they will be permanently housed (under glass) at TCD’s University Times. Thanks all. 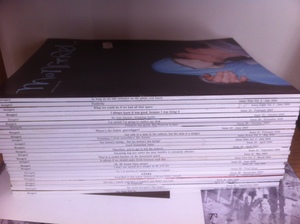 We don’t normally do this.

But seeing as it’s Mongrel.

FR, who appears to be emigrating, writes:

I have a bunch (25 I think) of Mongrel Magazine from a few years back and wonder if u guys might know of a good home for them? It’d be a shame to throw em out.

Only one of the best magazines to ever come out of Ireland and which gallantly served discerning hipsters throughout the later stages of the Celtic Tiger years.

Because the people who brought you Mongrel are now producing The Racket, a new online publication, based in London but with all the major Mongrel talent – Eoin Butler, Larry Ryan, Mark O’Connell and others – under one roof.

As editor Sam Bungey puts it:

“The Racket picks themes and works the hell out of them from every angle we can think of. The site aims to showcase writing, film, music and photography from around the world. Headquartered in London, The Racket’s aim is to bring together narrative journalism across all formats, with contributors who work in radio, TV and in print –  we are considering everything an audio comment forum to a talk show … we’re inspired by new publishing ventures like The Atavist, Byliner and Once Magazine. If it sounds a little antiquated to be enthusing about the exciting new possibilities of internet publishing that’s possibly a fair cop, but we feel it still remains to be proven that a magazine style site with free, original journalism can sustain itself. We will be putting out new themes regularly – there are currently stories in the works in Saudi Arabia, South Korea and Co. Louth. Anyone with ideas should get in touch at info@theracket.co.uk We’ll be tweeting as @littleracket