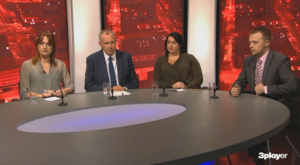 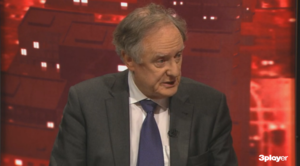 The show followed Noirin O’Sullivan’s appearance before the Joint Oireachtas Committee on Justice and Equality on Wednesday, of which Clare Daly is a member.

They discussed the ongoing Garda whistleblower controversies and, in particular, the meeting that took place between Fianna Fail TD John McGuinness and former Garda Commissioner Martin Callinan in a car park on the Naas Road on January 24, 2014.

Mr McGuinness has told the Dail that, at that meeting, Mr Callinan told him Sgt Maurice McCabe could not be trusted.

The panel talked about what else Mr McGuinness claims Mr Callinan said to him, without detailing what was supposedly said.

Readers may wish to note that, on RTÉ’s Six One on Wednesday, Fianna Fáil’s justice spokesman Jim O’Callaghan – who is also a member of the Oireachtas justice committee – told presenter Brian Dobson:

“I have confidence in here [Noirin O’Sullivan] and it’s not my part to be an investigator on this committee, this isn’t an investigative committee, there’s a judge who’s been put in place, Judge O’Neill, to inquire into the protected disclosures that were recently made, that is an investigative process and there will be a report produced at the end of that process and if that report is critical of individuals in high places whoever they are, I won’t be shy, nor will other members of Fianna Fail be shy about calling on those individuals to take responsibility. But what I’m not prepared to do, is just to call for somebody to resign in circumstances where allegations have been made against them but there’s no findings. In those circumstances, I do retain confidence in the commissioner.”

Further to this, from last night’s Tonight With Vincent Browne…

Vincent Browne: “Among the rumours that I’ve been hearing over the last while is that a senior Garda directed by an even more senior Garda sent text messages to other senior gardai and to members of the media, making horrendous allegations about a whistleblower and that a lot of these top echelons of An Garda Siochana were aware of this and may even have encouraged this. Now, it seems to me, if this is true and it isn’t the resignation of the Garda Commissioner that would be required but the resignation of an awful lot of people at a senior level. Have you heard this?

Michael Clifford: “It’s more than a rumour. I mean, a lot of what you said is in one of the protected disclosures but, as you said, Vincent, if it’s true, the issue is can it be proven? Can it be proven to a degree that it would for example, an official legal figure, whomever would be willing, would be satisfied enough…”

Browne: “It could be proved to be true or not to be true because the gardai have capacities to examine text messages, as we found out in the Elaine O’Hara murder trial, for instance, and they’d be able to look back at the text messages and see…”

Clifford: “If they wanted to…”

Browne: “But, sorry, there is available, the expertise, to look back at text messages…”

Gavan Reilly: “If the handset or SIM can be recovered which isn’t always necessarily a given.”

Reilly: “If the physical phone or the SIM card from which the text messages were sent is available to you – which may or may not be the case.”

Anne Marie McNally: “My understanding is that Keith Harrison is saying that he’s got evidence on his phone that will prove the allegations. But, if I’m reading it correct this evening, the judge that’s been appointed, according to the Commissioner’s testimony, he won’t actually have the power to examine phone records so I’m not sure if that extends to text messages but it would seem to be…”

Clifford: “He’ll be able to request it…”

McNally: “He should be, yeah.”

Reilly: “That’s part of the problem of the inquiry that’s been asked of Iarlaith O’Neill, that because he’s existing in a very legal grey area, where it’s all very ill-defined where he’s not acting in a judicial capacity, he’s effectively acting as a kind of wise alderman but he has no powers of compellability or inquiry, as such, so all he can really do is ask people to cooperate and if they do, then he’s entitled to come up with an opinion, as eminent as it might be but that he’s ultimately flying blind. He doesn’t have the powers to demand anything of anybody. So, realistically, the scoping exercise…”

Browne: “So what’s the point?”

Daly: “Well that’s the question, isn’t it. And I mean obviously points have been made by the two…”

Browne: “You’re aware of what I’m talking about…”

Daly: “I’m absolutely aware of what you’re talking about…”

Browne: “My understanding is that when a senior garda person got a, got this text message, the reply was ‘perfect’ which would seem to imply that that person, that senior garda officer was aware of the plan to smear the reputation of the whistleblower in the most odious possible way that you could think of.”

Daly: “At the heart of the protected disclosures is precisely that, that there was an organised and orchestrated deliberate campaign, authorised at the top, including the current and the former commissioner to effectively do exactly what you’ve said – to demonise, to ostracize and put everybody off this whistleblower so that he would be a person that nobody would want to touch or listen to and I mean media people would have got that information, obviously a lot of guards, but politicians did aswell. And, you know, whatever about maybe…”

Browne: “Did politicians get them?

Daly: “Texts, part of the allegations that selected politicians were sent these messages also..”

Daly: “And given that message which…”

Browne: “Who were they?”

Daly: “Well, I don’t know, I know I definitely wasn’t one but it begs the question that even if, initially, some people believed it to be true, as I’m sure some people would, when it emerged around the O’Higgins Commission and the evidence that emerged in that, whereby the commissioner’s legal team had been instructed to undermine the credibility of Maurice McCabe and question his motivation and all of that came into the public domain, why wasn’t that the trigger for people to come forward? And say, ‘hang on a minute here, there’s a lot more to this than meets the eye. A huge problem now with the inquiry is that the present whistleblowers, the serving guards, who were live, who made protected disclosures, under Noirin O’Sullivan’s watch, they’re allegations of mistreatment and bullying are not being included in Iarlaith O’Neill’s terms of reference…”

Clifford: “What would be very interesting in that inquiry is whether the chairman or the judge asks in somebody, for example, [Fianna Fail TD] John McGuinness, who may have something to say. And he’s nothing to hide himself whatsoever but he may have something to say in relation to his meeting with former [Garda] commissioner Martin Callinan and did anything transpire there that may be of any use to Mr O’Neill trying to get to the bottom of this issue.”

Browne: “I think many of us know what John McGuinness says he was told by Martin Callinan.”

Clifford: “He hasn’t publicly stated it himself, I suppose for good reason, but he hasn’t. But I’m sure…”

Browne: “It is truly shocking. It would really..absolutely shocking. I think if viewers knew what was said, what John McGuinness says was said, I think they would be appalled…”

Reilly: “To go back to the very last point though, what John McGuinness and his meeting with Martin Callinan in a car park somewhere on the Naas Road. John McGuinness revealed that, on the Dail record, he was in the chamber, when he was speaking under privilege but I think he’s repeated it outside the chamber since, that Martin Callinan told him Maurice McCabe was, quote, not to be trusted. Now if that, that in most people’s eyes I think would qualify as an attempt by the most senior garda in force…”

Reilly: “Well is it tenable for the commissioner at the time to be intervening as he did to cast those kinds of aspirations on the character of Maurice McCabe as he was…”

Reilly: “And for his assistant deputy commissioner not to know?”