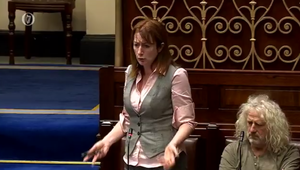 Clare Daly tells Dáil a District Court judge is ‘causing huge problems with regard to the administration of justice’ pic.twitter.com/2GvochzqdM

Her appearance in court followed a bench warrant being issued by Judge Desmond Zaidan for her arrest on October 13 after she left the court – before her case was called.

Clare Daly: “I am absolutely delighted that the Bill has been tabled. People often correctly give out about politicians but at least we have to go before them once in a blue moon and there is some element of accountability and right to recall whereas the Judiciary is completely and utterly a law unto itself. It is great that so many judges perform so well but we are stuck with those who do not. While I am glad Fianna Fáil introduced the Bill, the measures will only go some way to improving the quality of the judges we end up with.”

“The idea that somebody could be in such a position of power because of political connections rather than merit and so on is absolutely reprehensible and I welcome the measures in this regard. However, we need to put the spotlight on this issue. Substantial reform in this area is critical. The lack of training and regulation of judges is a huge problem. When they behave irrationally, nothing can be done. The idea of justice not only being done but being seen to be done cannot happen in our State while the Judiciary is organised in the manner it is currently.”

“I would like tell to story and I assure the Chair that the story, even though it involves a court case, will not go into details of the case in front of the judge but it is a graphic example of what I am talking about. It is incredibly fresh in my mind because it happened today and it involved me and a judge in Naas District Court. The history of this case is that I was summonsed to appear before Naas District Court on a driving offence. I allegedly drove at a speed of 59 km/h in a 50 km/h zone. Three weeks ago, I was called in respect of the case. The case was not listed for a hearing on that date; it was to be the first mention in court.”

“When I arrived in court, the case was No. 188 on the list and the judge is well known in the area, for whatever reason, for not starting judicial proceedings on time. Even though the court is scheduled to begin at 10.30am, he regularly appears much later than that. There is also a tradition of cases being religiously taken in order. In every court sitting I have ever attended as an observer, defendant or plaintiff, the judge normally goes through the list, dispenses with the cases in which a court date is being sought and keeps back the cases that are due for hearing in order to efficiently administer justice and ensure the management of the time of all the people who end up in the court on the day, including those who take time off work to attend because they have been summonsed as witnesses or defendants, solicitors, gardaí, prison officers and so on.”

“My case was listed as No. 188 out of 188. The judge proceeded with the cases for the morning. I watched what was happening in them and then I instructed a solicitor on this minor driving matter and left the court at lunchtime. Later that day, I attended an Oireachtas committee meeting and I was not to know that the judge having reached case No. 175—–

Acting Chairman (Deputy Catherine Connolly): Is the Deputy relating this to the Bill?

Daly: I am. It relates to the fact that judges are not subject to any accountability whatsoever and to the huge costs the State can incur because of their irrational behaviour. When the judge was finishing up for the day, he had reached case No. 175 but decided to jump to the end of the list and call case No. 188. He called the solicitor before the court and asked him where was his client, even though I had instructed the solicitor, and what reason I had for not being there.

“The reason was I had been there in the morning and had watched how this judge had dealt with cases. I witnessed cases being called for which people did not turn up on similar charges or did not have a solicitor. No bench warrants or any other proceedings were dealt with. A judgment was simply given in those cases.”

“Judges are an incredibly powerful position. I respect our court system and I respect the fact that judges have discretion but that discretion has to be exercised proportionately and rationally and when it is not, there has be some body in place to call them to account. The judge could accuse me, without any recourse on my part, of disrespecting the court.”

“By doing that and issuing a bench warrant in those circumstances when I clearly was not a risk of absconding – the case not even listed for a hearing and he dealt with other cases earlier without issuing a bench warrant against those who were not there or who did not have a solicitor – the consequence of his action was that An Garda Síochána, which was an innocent victim, was subject to massive negative publicity that it had orchestrated this.”

“A sergeant had to leave his post in Newbridge, drive in a squad car to Swords and spend the day there vacating the order at enormous expense to the State. I had to return to Naas District Court today to listen to the same judge lecturing me about disrespecting his court without giving me an opportunity to say anything about his irrational decision.”

“Our laws provide that nobody can do anything about that judge but he is causing huge problems with regard to the administration of justice given the inefficiency of the court sittings in his district. This needs to be radically reformed. I am glad that Fianna Fáil opted to introduce the Bill today because it is long overdue. This is only one aspect of judicial oversight and we need to go further.”

“I acknowledge a judicial council is included in the Government’s programme but some outrageous decisions and behaviour are taking place in our courts. In fairness, the presidents of the District Court, Circuit Court and so on can do nothing about it. That cannot be allowed to continue.

“Judges have been appointed to areas or even communities in which they worked as a solicitor and this has led to conflicts of interest. They presided over cases involving people they formerly represented and proceeded to hear the cases, which is completely wrong.

“The option of challenging judges through a judicial review is not sufficient because one is putting oneself in a position of massive expense and accusing a judge of bias, which people do not want to do.”

“Other members have made points about some inconsistent decisions which have been made with far more awful consequences than mine. I wanted to use my case as an example of the utterly ludicrous behaviour of some of the people we have entrusted to manage our courts but no one can do anything about it.”

“The saddest point about the case I referred to is that the judge in question is the sitting judge in Naas District Court. This means he can stay there for as long as he likes. From looking at him today, he has a few years left in him. The court could have him for about 12 more years.”

“The expense to the State of having 100 gardaí, solicitors and people tied up every day while he operates his court place, like I described, is utterly ludicrous and in radical need of change. I support this bill as a first step in that process.”