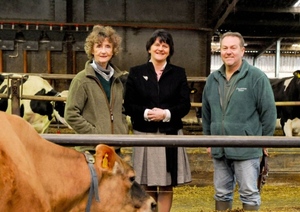 An Irish dairy authority has been accused of protectionism after some Northern Irish milk processors found themselves unable to sell south of the border.

Many retailers in the Republic are requiring Ireland’s National Dairy Council (NDC) label guaranteeing milk was produced in the State when sourcing supplies. Because Northern Irish processors do not have that guarantee, contracts have been lost, including a major Dale Farm bid to supply Superquinn.

…Stormont enterprise minister Arlene Foster said. “If the campaign were to be replicated in Great Britain, excluding product that was not produced and processed in the UK, it would cause immense problems for the food industry in the Republic of Ireland.”