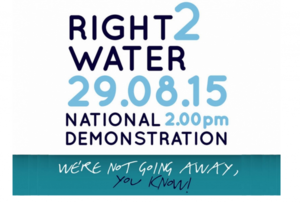 “It’s very clear this government believes the water charges issue has gone away. We’re saying very firmly that it hasn’t and this will be the biggest issue when it comes to the next general election.

“On Saturday, 29th August we intend to show this government that water charges are still the number one item on the agenda and we have no doubt this will be our biggest event yet.”

“The Right2Water campaign believes recent events where the government gave the courts the ability to attach unpaid water bills to earnings in two years time have only added fuel to the fire.”

“People are outraged. The Government obviously recognise they have lost the debate.”