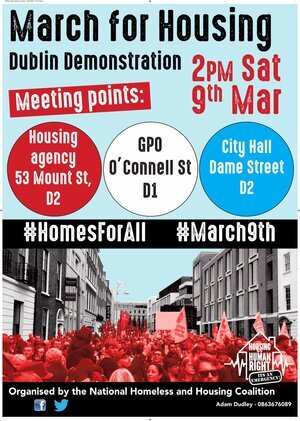 From 2pm, at the The Housing Agency, 53 Mount Street Upper, Dublin 2; the GPO/Spire, Dublin 1; and City Hall, Dame Street, Dublin 2, there will be a march for housing.

The coalition is supported by community groups, charities, NGO’s, student unions, political parties, trade unions, musicians and artists and we need to build on the momentum of last year that saw 18,000 people take to the streets in December.

We need to show the Government that we will no longer accept their lack of will to build public housing on public lands and their continued over reliance on the private sector to address the homeless and housing emergency.