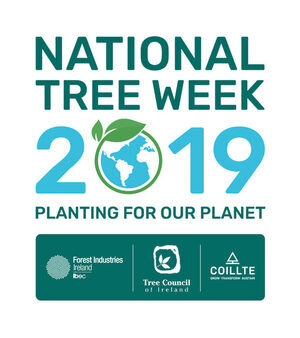 To mark this, Dr Gavin Jennings (above left) spoke to the vice-president of the Tree Council of Ireland Éanna Ní Lamhna (above right) on RTÉ’s Morning Ireland earlier today.

Dr Gavin Jennings: “It’s National Tree Day today. It’s a day arranged by the Tree Council of Ireland to communicate the value of learning outdoors and the importance of native trees in preserving biodiversity. Éanna Ní Lamhna is here.

“She’s a biologist, environmental consultant and vice president of the Tree Council and well known to listeners of RTÉ Radio One. Éanna thanks for coming into us this morning.”

Éanna Ní Lamhna: “Didn’t we pick a great day. Although, mind you, it’s as calm as anything, as I was coming in. But I see, the evidence says later on, this morning, the winds will be gusting and the rain will be coming. So, while it’s National Tree Day, it’s National Tree Day at this time…”

Ní Lamhna: “So I hope teachers have a titter of wit and won’t be bringing out the kids if they’re going to be blown away. That wouldn’t be what we’d be wanting.”

Jennings: “The whole point of this day is literally to take children outside to have a look at the trees, isn’t it?”

Ní Lamhna: “That’s right. Because every year the Department of Education allow children to put down their books and go out and go on walks, climb trees, play with conkers, run through the leaves, enjoy the trees and learn all about them.”

Ní Lamhna: “And the third of October, which is also Ivy Day, in Parnell’s day is what we have, the first Thursday always in October. So how were we to know when we arranged this last…six months ago…that there was going to be Hurricane Lorenzo.

“And I mean, a day is a day is a day. They can do it next week because they also get a free tree if they go on the website – treeday.ie – you can send in for your tree and you plant it. And by the sound of things, we’re going to be needing to be planting some trees once this hurricane is gone through.”

Ní Lamhna: “Well 11 per cent of the country is covered in trees which is the lowest amount in Europe actually. Eleven per cent of forestry and woodland. There’s a few more, maybe another one or two per cent, in hedgerows and parks and that sort of thing.

“You know, it’s way down and I mean the European average is 38 per cent.”

Jennings: “But was it a lot lower than this?”

Ní Lamhna: “It was fadó, fadó, indeed it was. And as we all know…when Cromwell and the soldiers came along in the 1600s, they planted them, gave them land and, of course, they weren’t welcome, so they ash-stripped, got rid of the trees, sold them off and legged it back to England.

“And then in the 1800s, our population increased enormously and, as you know, poor people, when there’s problems with things, they cut down the trees, as they do in Africa today, to use as firewood. So, but when we got our independence in the 1920s, we only had about one per cent of the country covered in forest.

“So we’ve done a lot since then, to get it up to 11 per cent and we really need to be doing a lot more because the only way you can get carbon dioxide out of the atmosphere is by photosynthesis.

“One big fully grown tree contains five cubic metres of carbon which is what one family with two cars uses in one year. It takes an oak tree 80 years to get to that size. Mind you, a sitka spruce can do it in 40 because it grows day and night. Sorry, it doesn’t grow at night, it grows at winter and summer because it has its leaves the whole year round.

“But we need to be planting more trees. We’ve removed half the trees in the world since humans got their hands on the tiller. Some way to be looking after it. I don’t know that they listen properly to God when he was creating the world and putting man in charge. We made some bags of it, didn’t we?”

Jennings: “Half past eight. I’ll get to the news headlines in just a moment. Would you take a bunch of eight or nine-year-olds out, outside to look at trees today?”