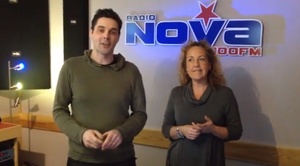 Joan Lea and Marty Miller from Morning Glory on Radio Nova 100 are making a donation of €100 to the Temple Street Children’s Hospital and – creating a positive twist on the viral drinking game, neknomination – have nominated FM104’s Strawberry Alarm Clock and Spin 1038’s Fully Charged to make a donation to their charity of choice….