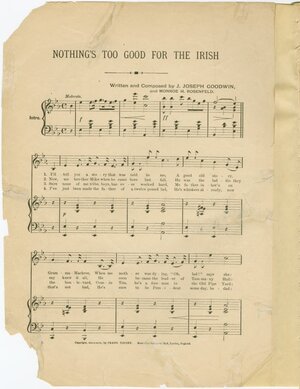 Dutchmen were made for to carry coal and shovel snow, Italians for organs, And Englishmen to mash;
Chinese for washing, the Japs for a juggling show, Nagurs to whitewash, the Jews were made for cash; Cubans for cigarettes, the Portugese to sail the sea, Scotchmen for bak’ries, the French were made for style, Russians for mining, Americans for liberty,

‘Nothing’s Too Good For The Irish’. written and composed by J. Joseph Goodwin and Monroe H. Rosenfeld, 1894.