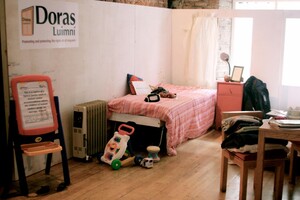 Yesterday, the Northern Ireland High Court in Belfast ruled that a Sudanese political journalist, aged 37, and her three children, aged 18, 16, and 12, should not be sent back to Ireland because Ireland’s Direct Provision system would not be in the best interests of the family.

The woman, known only as ALJ, and her children made their way to Dublin from Sudan in April 2010, via a three-week boat journey operated by traffickers.

Their application for protection was rejected in Ireland and in July of 2011, they travelled to the North and applied for asylum there.

However, the UK Border Agency requested Ireland to take them back, which the Irish government accepted.

Yesterday’s ruling was a result of the family challenging this decision.

While delivering his decision to quash the removal order, Mr Justice Stephens took issue with the UK Border Agency’s assertion that the family would be afforded the same opportunities for development, and the same level of support, in the Republic as in the North.

On the contrary, he said:

“For those reasons alone the best interests of the children are that they should remain in Northern Ireland.”

Previously: Today In The High Court

The Institutionalisation of 1,818 Children In Ireland