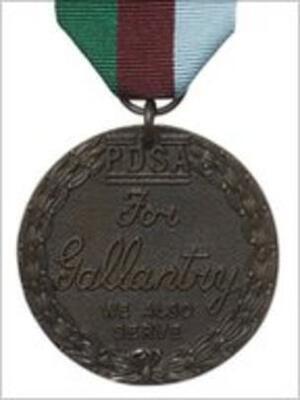 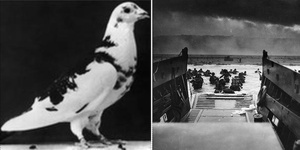 From top: The Dickin Medal; Paddy (left) a messenger pigeon who served with the RAF during the Normandy operations (right) in June 1944.

For the D-Day that’s in it.

Paddy the Pigeon was born and raised in Carnlough, County Antrim and joined thousands of other racing birds who were trained and drafted to RAF Hurn in Hampshire for military service.

Impressing military brass with his flying in the Air-Sea rescue units he was seconded to the United States First Army for undercover missions during the Normandy Landings.

In the face of poor weather conditions and the threat of German falcons, deployed to intercept Paddy and his comrades, he delivered his message to his home loft at RAF Hurn.

After the war Paddy returned to Carnlough and lived out his days with his owner Captain Andrew Hughes, until his death in 1954.

Paddy’s medal is now owned by Kevin Spring, a former Irish Army Officer who bought it at auction for almost £7,000 in 1999…