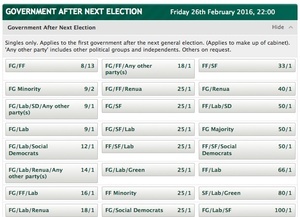 Paddy Power odds on the make up of the next government

But what are the bookies saying?

The bookies never lose as they say but the odds should be seen both as a reflection of what is likely to happen and where punters money is going.

There are many different books open ranging from betting on the turnout to the results in each of the 40 separate constituencies and, for the record, Laois is the favourite to be the first constituency to return a first count.

When it comes to government formation, the clear favourite remains the ara-sure-it’s-grand coalition of Fine Gael and Fianna Fail. This is not surprising as it is in step with what polls are saying.

It is interesting to note, however, that Betfair, Paddy Power and Ladbrokes have all recently shortened their odds on a Fine Gael minority administration indicating perhaps that a Tallaght strategy style arrangement where Fianna Fail supports a Fine Gael minority government (without taking seats at cabinet) is a strong possibility.

This makes sense in the light of both Civil War parties down playing the idea of a full blown coalition. How stable such a set-up would be is another matter.

Ladbrokes are saying a second election this year is incredibly likely at an unbackable 8/15.

In other news, for those watching out for the potential effect of the new gender quotas regime Paddy Power seems to predict that the number of female representation is likely to remain static quoting odds of 5/6 on it remaining at 19.5% or less.

It should be noted that in the last UK election the betting odds tended to follow the opinion polls, despite the traditionally perceived bias that they traditionally tend to have a bias towards the Conservatives.

Once again Paddy Power on the ball! Nearly spat my coffee out!