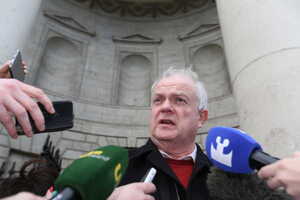 Jerry Beades, of the New Land League, at the High Court this afternoon

Jerry Beades, of the New Land League, spoke with Rachel English briefly this morning on Morning Ireland in light of the situation regarding the O’Donnell family home in Killiney, Dublin.

The interview was wrapped up after Mr Beades claimed a PR company was hired by a bank in relation to the story.

Rachel English: “Brian O’Donnell is assisted by members of the group known as the New Land League and their spokesman Jerry Beades joins us. Good morning.”

English: “For how long is Brian O’Donnell planning on staying in the house?”

Beades: “Well, basically, Brian O’Donnell, there is no court order for Brian O’Donnell to vacate the house – that’s the first thing that’s being misreported in several sections of the media. The order was for the four children to vacate and Brian O’Donnell has a right of residency in the property and it wasn’t addressed. And these are the matters that are now being addressed in the High Court.”

English: “But if the High Court doesn’t decide in the family’s favour today, will he leave?”

Beades: “Well the action today is for the children. There’s no court orders for Brian O’Donnell to leave. So this is an issue that the bank then is going to have to address and they haven’t addressed it. And then the question is: which bank is going to address it because the wrong bank has taken the proceedings. The wrong bank has disposed of Brian O’Donnell’s assets. And, in a very shoddy way, it cost the taxpayer a fortune.”

English: “Right, well I don’t want to go through all of that now because, obviously, this is long and complex and, perhaps, here on air this morning isn’t the place to do it.”

English: “But can I put to you the commentary, fairly widespread commentary this morning, that the New Land League is getting involved in the wrong fight here: that the O’Donnells were property speculators who came unstuck?”

Beades: “This is not about the O’Donnells. This is about the legal issues that surround what’s going on here, the same as affect every small family in Ireland. The legal issues that the bank are at here, there’s 27 Ulster Banks taken people to court and they don’t have legal titles for most of the properties. Bank of Ireland’s the same. There’s a huge legal issue here that’s not being debated whatsoever and that’s the reason the Land League is in the middle of this storm because this is an issue for Brian O’Donnell, it’s an issue for a small family with a farm around the country. There’s a half a million people facing this situation. And the Government, and the people of the country, have got to wake up, not just a single Brian O’Donnell. The legal issues that are here, the failure of the court to deal with it properly. The failure of the courts to take the wrong bank into its court room and not identify those issues.”

English: “Right. I’m sure the judges, I’m sure the judges in question would dispute that but just, again, on that question of how this looks to people out there. Certainly again, looking at this morning’s papers, reading the commentary, most people find it hard to equate the O’Donnell family with the small family farm or with the hard-pressed mortgage holder around the country.”

Beades: “Well, I mean I can’t countenance what the papers are writing. When you have a PR company hired by the bank, at taxpayers’ money, to spin a story out there – which is the wrong story – and if people want to listen to that, or want to listen to the truth, we put out a press release yesterday which sets out the issues here and if people, they’ll get it on our website, if people want to understand. The legal issues here in the O’Donnell case are the same for every family that’s resisting repossession at the moment.”

English: “So you will continue to support them then?”

Beades: “We are supporting the issues in this because it’s one of the most high-profile cases where there’s PR companies hired by banks to do in people and we’ve seen it…with Sean Quinn, the same situation.”

Beades: “Well, explain how all the media turned up yesterday morning?”

English: “Ok. All right, listen, we’ll leave it at that. Jerry Beades, thank you very much indeed.”