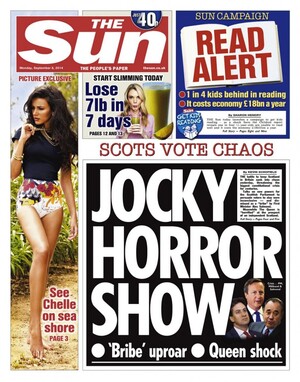 Further to the decision to remove the topless Page Three models from the Irish Sun in August 2013, Roy Greenslade, of The Guardian, writes:

“Whisper it lest it get about, but I think the Sun is quietly weaning itself off page 3. The paper has not run its usual topless picture since Thursday. It hasn’t given up publishing pictures of scantily-clad women, of course. But the long-run routine of publishing a model smiling vacantly at the camera with her breasts on show has been disrupted.

Friday’s page was devoted to shot of a naked Kim Kardashian with her nipple concealed. The Saturday and Sunday issues, as has long been the case, featured non-topless pictures.

Today, across pages 2 and 3, are a set of tastefully clothed pictures of a former Coronation Street star, Michelle Keegan, on a modelling shoot in Majorca.

According to an official Sun spokesman, “it’s often the case that if we get exclusive pictures from our more popular female stars we will give them a page 2-3 spread.”

The Sun’s Page 3 topless pictures appear to be on their way out… (Roy Greenslade, The Guardian)