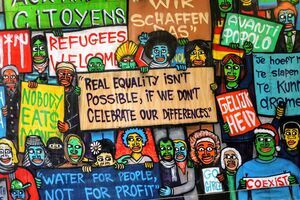 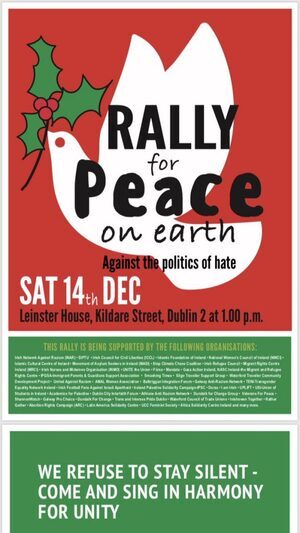 Outside Leinster House, between 1pm and 4pm.

A Rally for Peace On Earth, Against The Politics of Hate will be held. To wit:

In this season of peace and joy, we – faith groups, trade unions, community groups, ordinary working women and men, children, families – are coming together on Saturday December 14, to sing and eat mince-pies in the spirit of the festive season, and to stand up for an Ireland where everyone feels safe and welcome, where we don’t give airtime to those who seek to divide us and where we can benefit from the richness that all cultures, and all people bring to this island we are proud of.

Rally for Peace on Earth – Against the Politics of Hatred (Facebook)

All parties and all people welcome. Fight Charlie Flanagan and Fine Gael’s attempt to control what we can and cannot say. No pretext is justifiable to limit speech, “hate speech” or otherwise.

You have a right to freely express your convictions and opinions (Article 40.6.1.i). However, the Constitution asserts that the State should try to make sure that the radio, the press and the cinema are not used to undermine public order or morality or the authority of the State. It also states that it is an offence to publish or utter blasphemous, seditious or indecent matter.

Minister for Justice Charlie Flanagan has said he would like to see new legislation on freedom of speech introduced next year.

A public consultation has been launched to update Ireland’s law regulating hate speech.

The consultation phase will run to 13 December, while a second phase dealing with hate crime will be published in the new year.

Mr Flanagan said it is important that our legislation in this area is fit for purpose.

There have been about 50 prosecutions under the existing hate speech legislation in the 30 years it has existed, with a handful of convictions.