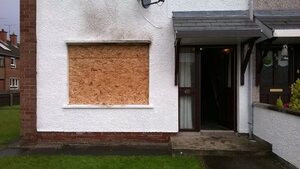 Margaret Ibrahim and Amin Ibrahim say their home was petrol bombed in Ballymena in wake of Paris attacks pic.twitter.com/BBbwfWbCXQ

Muslim man attacked in petrol bomb attack at his home in Ballymena early this morning, PSNI they are treating it as a hate crime.

A family whose home was petrol bombed in Ballymena overnight believe the attack was motivated by Islamophobia.

The missile was thrown through the window of a house in the Kintyre Park area of the Ballykeel estate at around 1am on Tuesday.

The front room of the home was set on fire but the four family members inside were able to extinguish the flames and were not hurt.