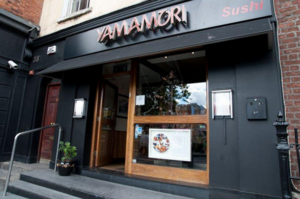 You may have heard of Work Must Pay.

It’s a campaign group whose members protest outside businesses which use JobBridge to hire staff. It includes members of the Connolly Youth Movement.

It recently held a picket outside Yamamori Sushi on Lower Ormond Quay, Dublin 1.

Conor O’Donovan, a journalist with Trinity News, accompanied the group.

“After about 40 minutes of protest at Yamamori Sushi, a member of the picketed business’ management emerges. There is something of a confrontation as he enquires about the aim of the protest. The members of Connolly Youth Movement explain their stance on the business’ current use of the JobBridge scheme. The business has posted an advert looking for several JobBridge interns to be employed in a culinary capacity, positions they have probably already undertaken training for.”

“There is a brief exchange concerning the intricacies of the business’ JobBridge post. There seems to be a slight discrepancy in the manager’s alternate use of the terms traineeship and internship, a discrepancy which is picked apart by the picketers on the way back to Connolly Books. The applicants have already undertaken training, let them work for a living wage is the upshot.”

“After a brief interlude, the manager emerges once again. This time, he tries a different tack. He’d just googled Work Must Pay and nothing had come up. He announced the JobBridge post would be taken down the following day but that this had nothing to do with the protest. There had been a lack of response as people seemed quite happy to stay on benefits, he says.”

“There was considerable dispute over this last remark, but names were exchanged and the management even invited the picketers back the following afternoon if he didn’t keep his word and take the advert down. It would be peak business time and there would be a lot more people coming in and out of the shop.”

“On the way back to Connolly Books, the picketers briefly debate whether they can count this as another victory. 24 hours later, the advert was taken down, as promised. Whatever the reasoning of the management at Yamamori was, one less business in Dublin are hiring JobBridge interns, and this may not have been the case had there been no picket.”