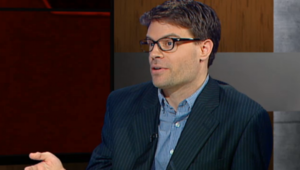 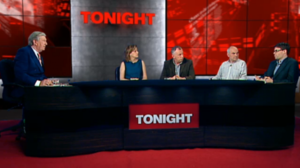 Dr Julien Mercille, UCD lecturer and author of The Media and the Irish Economic Crisis: A Political Economy and Dr Mercille with journalist Margaret Ward, Mick Clifford, of the Irish Examiner, and journalist and author of The Frontman Bono (In The Name Of Power, Harry Browne, on last night’s Tonight With Vincent Browne, hosted by Tom McGurk

In particular he took aim at the political editor of The Irish Times, Stephen Collins.

Tom McGurk: “Can we talk about the political correspondents? Those people who dwell on the…what do they call it, outside Leinster House?”

Clifford: “Well, in a small country, you’re going to have an atmosphere whereby there is a certain consensus, whatever. Within that context though, to be fair, I don’t think you can just label political correspondents as one. I think there is a diverse group within them. But it’s inevitable, it’s inevitable in any type of set-up where you’ve…”

McGurk: “But they’re your consensus journalists, aren’t they? They’re down the middle of the line, aren’t they?”

Julien Mercille: “There’s a lot of very good examples but let’s take like Stephen Collins, of The Irish Times. He wrote a piece a few weeks ago, saying that Enda Kenny was doing well for the country because Enda Kenny was happy, or was smiling or something like that. That makes no sense whatsoever. I mean, and that passes for…”

McGurk: “Well, he’s not here to defend himself…”

Mercille: “Well, that’s what he said. He said that he was doing well…”

Clifford: “I think now, to be fair, I’ve read his columns and whether you agree or disagree with them, there’s a certain analytical element to them.”

Mercille: “There are some good columns. I’m giving one example of a column. Another very good one was a piece about Christine Lagarde, IMF chief, saying how good she was at yoga and how good she was an negotiating with a scarf, with men and turning down the thermostat. That’s like, that’s not…”

McGurk: “But we complain consistently about the political classes so on and so forth but you rarely find any of the political journalists saying that, do you? They’ve got to survive in there, haven’t they?”

McGurk: “And should they be in there for a long time? Or after two years shouldn’t they be taken out?”

Margaret Ward: “No, why aren’t they rotated? I mean, again, this would be normal journalistic practice.”

McGurk: “They go native if you leave them in there too long?”

Ward: “You would be rotated from a beat after two years. So, if you’re covering politics, after two years, you have to move on to something else, to something else. That keeps you from getting too close to your sources. The closer you get to your sources, the more reliable, the more reliant you are on them and therefore it becomes a little too cosy. And as you [McGurk] said, half these people all live in the same part of Dublin 4 or 6. Their kids go to school together, they play golf together, you know, they’re in the same restaurants..”

Browne: “Rotation is a great point because specialisation can be overrated, I think a really good journalist is someone who can pick up a subject and by the end of the day, or by the end of the week, or the end of the month, depending on the complexities of the subject, they’re expert enough to tell that story.”

McGurk: “This is a very depressing consensus we’re building: they’re all playing golf, they’re all going to the same schools and they’re all saying the same thing.”