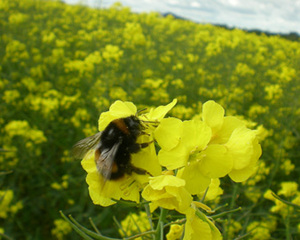 As you  may know Irish farmers have just finished sowing their winter cereal crops….including oilseed rape.

I wanted to let you know about a study we have been doing In Trinity College Dublin on crop pollination by bees and other pollinators in Ireland.

Our paper [published online today – link below] found that oilseed rape crops produce 27% less seed when not visited by pollinators, which amounts as a benefit of €3.9 million of oilseed rape pollination to Irish Economy.

Oilseed rape flowers that were pollinated only by wind, where bees and other insects were excluded, produced on average 27% less seed than those that were visited by insects”

G’wan the bee and others.

However, the story is not all good news. A recent EU ban on certain neo-nicotinoid pesticides for use on flowering crops is based on evidence that these pesticides can harm bees; and these pesticides are commonly used in oilseed rape, especially as seed dressings. This indicates a mismatch between the benefits of pollination to the crop and harmful impacts of pesticides on bees.