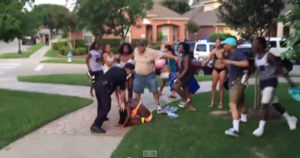 “A police officer in McKinney, Texas, has been placed on administrative leave after a video surfaced showing him wrestling a bikini-clad 14-year-old girl to the ground and aggressively confronting other teens at a pool party, police said Sunday.”
…
“In another part of the video, the officer pulls his gun on a group of teenagers.”

“Brandon Brooks, who shot the video on his phone, said he found out about the pool party on Twitter. He was leaving the pool with his friend when he heard of a fight outside. Brooks said that the fight was over when cops arrived but that they started chasing people and throwing them on the ground.”