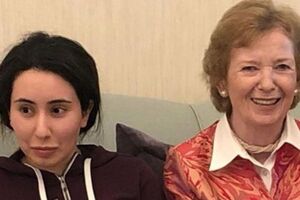 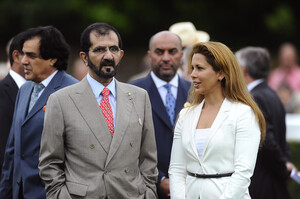 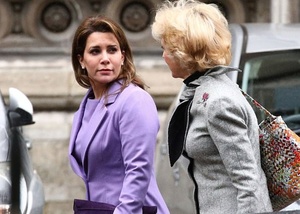 From top: Princess Latifah and Mary Robinson in Dubai, December 2018; Princess Haya and Dubai ruler Sheikh Maktoum in 2016; Princess Haya outside the High Court in London this morning;

The ruler of Dubai today lost his court bid to keep secret his marital feud with his youngest wife who ran away to London.

The Appeal Court ruled that the world should know what a judge has concluded about Sheikh Maktoum and Princess Haya’s High Court wrangle, which has been going on since she fled Dubai last year.

Princess Haya, wearing a lilac dress suit, was in the Appeal Court in London to hear the verdict, arriving with lawyer Baroness Fiona Shackleton.

But despite the ruling, the details of the case remain private because the billionaire sheikh – a friend of the Queen – now has the option of taking his appeal to the Supreme Court, to ask the highest judges in the land to keep the case under wraps. 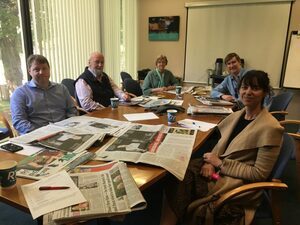 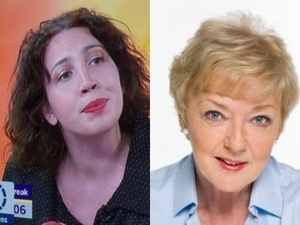 The newspaper panel was joined by CEO of Detained in Dubai Radha Stirling.

The panel was made up of Mary Whelan, Former Ambassador to Austria and Netherlands; Ken Murphy, Director General of the Law Society; Ciaran Hancock, Business Editor at The Irish Times; Fergus Finlay, former CEO of Barnados; and Amii McKeever, Editor of Irish Country Living.

Up until that point, it was known that Sheikha Latifa was seized from a yacht off the coast of India the previous March and had not been seen from since.

Latfia’s sister Shamsa Bint Mohammed Bin Rashid Al Maktoum was allegedly abducted from a street in Cambridge, England in 2000, by people associated with her father and brought back to Dubai.

During Sheikha Latifa’s bid to escape last year, she created a video in which she claimed Shamsa was a prisoner and had been tortured and mistreated.

Now that Princess Haya has fled, it has raised questions, for some, of Mrs Robinson’s move to visit Sheikha Latifa and pose for pictures with her before reporting that Sheikha Latifa was a “troubled” woman.

The discussion on Marian came ahead of Mrs Robinson’s scheduled appearance at an Irish Women Lawyers’ Association event on climate justice this Wednesday at Blackhall Place.

Ms Stirling explained that she had been on the phone to Latifa when she was seized from a US-flagged yacht off India. She said:

“She telephone me during the attack and said that she had heard gun shots outside, that she was frightened and asked me to please help. Then all communications with all people on board the yacht were terminated.

“And I didn’t hear from them until their later release.

“Unfortunately we haven’t heard from Latifa since then, except in the visit of Mary Robinson, attended in December at the request of Princess Haya.

“Obviously that was also widely publicised and she was criticised for having circumvented normal United Nations protocols because the UAE had not replied to UN requests to visit Latifa.

“And, instead, Princess Haya then asked Mary Robinson to come instead and she said that she was in the safe and loving care of her family.

“Now the world didn’t really believe that and now that we’re seeing Princess Haya coming out and saying that she was seeking asylum, that she’s fearful for her life and now she’s being taken to court by Sheikh Mohammed in the UK for the return of her children to Dubai.

“So she will obviously, during that court case, have to provide testimony as to the ill-treatment of Latifa if she’s to prevent the children from being sent back to Dubai.”

Following Ms Stirling’s comments, Ms Finucane played a clip of a previous interview Ms Finucane carried out with Princess Haya last January – in which she explained the reasoning behind her invitation to Mrs Robinson.

In the same interview, she said Latifa was a “vulnerable” woman and she was “receiving the love and protection of all of us”.

Ms Finucane put to Ms Stirling that Princess’s Haya had a “ring of sincerity”.

“I would think so but given that she is in the position of being required, probably, to give that sort of testimony and now, with her subsequent actions and reports in the media saying that, following that interview, she investigated further into the case of Latifa and discovered things that she obviously didn’t like.

“She perhaps discovered the abuse, discovered that she was being imprisoned and you have to remember that Princess Haya apparently hadn’t seen Latifa since that attack, except for that single day [with Mrs Robinson] and didn’t see her after that one visitation.“

Ms Finucane told Ms Stirling that Mrs Robinson has a “very distinguished record as a lawyer and a human rights lawyer”. She then put it to Ms Stirling: “But you’re very cross with her about this?”

“Well given that it circumvented usual UN protocols where they would send a team of people who are trained to see whether Latifa was under duress during that meeting and Mary had a meeting with Latifa for several hours, or two or three hours perhaps, and then came out with a report saying she’s absolutely fine.

“And, clearly, from Latifa’s testimony, she’s never been fine in the custody of her family.”

Asked for his opinion on the matter, Fergus Finlay, who worked with Mrs Robinson during her presidential campaign, said, on the face of it, her intervention seems “odd” given she’s not a medical expert.

But he said anyone who has worked with her wouldn’t question her integrity “for a second”.

“I don’t understand this story. It seems incredibly complex and arcane.

“And, you know, all sorts of peculiar elements – divorce and acrimony and so on are tied up in it aswell. And obviously huge amounts of money at play.

“And it may be that Mary Robinson made an error of judgement in being dragged into the middle of it. I’d be amazed if anyone would question her good faith in the matter though.”

“I’m really struggling to figure out how this story fits in and it may be my own stupidity, it feels very much like I’m being asked to comment on the third series of Dallas – never having watched the first two series. I mean it’s and incredibly complicated story of divorce and money and bitterness and so on…

Later on during the discussion, Ms Stirling said:

“The issue is, in having done that [Mary Robinson visiting Latifa], Latifa’s case could have potentially been closed as far as the investigation is concerned. And the UAE, under such public scrutiny, with such disbelief over Mary Robinson’s report, should then cooperate with the further requests that the UN has made of them for visitations with Latifa.

“And they simply haven’t responded – not even to a request for proof of life.”

Ms Finucane asked Ms Stirling, given there are reports of Princess Haya seeking protection, not trusting the police, and fearing for her life, if there is the possibility that the story is “getting into the realms of the unbelievable”.

“No I really don’t think we are. What we’re seeing is an increase in belligerent behaviour, coming from the Gulf Region. We’re seeing Saudi able to kill Khashoggi in an embassy in Turkey, we’re seeing an attack on an international yacht, we’re seeing, previously, his two children have been seized from outside the UAE jurisdiction.

“And I would say that Princess Haya is extremely, and also, obviously, his children…he has a history of unlawfully, extrajudicially returning his children back to the UAE. So I can understand why they would be on complete lockdown with extreme security.”

Ken Murphy, of the Law Society, referred to reports in yesterday’s papers, before saying”

“All I can say is, having known every little about this story until we began to…it is becoming more and more fascinating.” 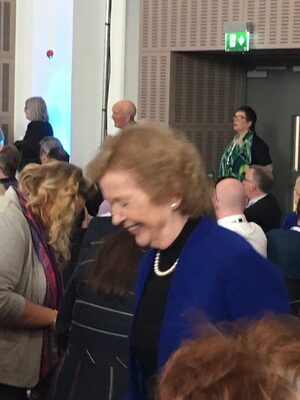 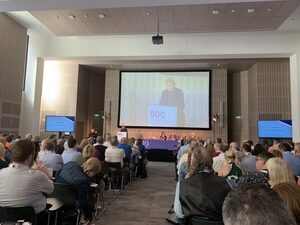 Princess Haya: Dubai ruler’s wife in UK ‘in fear of her life’ (BBC)

FYI, #MaryRobinson: #FreeLatifa is still my friend. And she’s not a “troubled woman”, like you claimed in Dec. She just wants freedom. Now that #PrincessHaya has also fled, it’s about time you reverse your false comments #HumanRights @TheElders https://t.co/NmmwXWUHNG

Yesterday: All That You Can’t Leave Behind 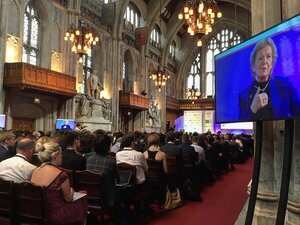 From top: Princess Haya; Mary Robinson with Princess Latifa; Mrs Robinson at the launch of the Green Finance Summit in Guildhall, London yesterday

At the weekend, it emerged that the UAE’s Princess Haya bint al-Hussein had left her husband and prime minister of the UAE Crown Prince Sheikh Mohammed bin Rashid al-Maktoum.

Up until that point, it was known that Sheikha Latifa was seized from a yacht off the coast of India the previous March and had not been seen from since.

In a video made before she attempted to flee the UAE, Sheikha Latifa said she spent seven years trying to flee a gilded prison and feared torture if captured.

Princess Haya gave an interview to Marian Finucane on RTÉ Radio One in January – and she outlined that she invited Ms Robinson to the UAE to help in a “private family matter”.

It’s not yet known if Princess Haya will now speak out about the living conditions she, and Sheikha Latifa, faced in the UAE.

During her interview with Ms Finucane, Princess Haya was asked why she invited Ms Robinson to Dubai.

“As you know, when you’re faced with a situation in life, that’s so profound and it’s deeply attached to your values, your family and situations that are complex and difficult – I’ve always learned in life to ask for counsel, to look to those who, you know, are wiser, and  more experienced.

“But, above all, those who tell you the truth, without mincing words, without colouring them. And a person who’s a true friend who will look at a situation and tell you the right thing, not what you want to hear.

“My father always said that Mary was a person who really held precious what he believed and what he taught me to live by which is that, you know, the real victories in life are those that protect you in life….”

Princess Haya told Ms Finucane numerous times that it was a “deeply private family matter” and she didn’t wish to go into details of it “for the protection of Latifa herself and to ensure that she’s not used by anyone else”.

“Being asked for proof of life and being asked to prove that someone that we love, that I love,  is simply…it’s absurd. We’ve done our utmost to help and protect and support her through this period and we continue to do so.

“It’s unimaginable that this thing has gone so far from the truth.

“It’s been unbelievable, devastating and I really wanted to get the right advice from Mary on how to move forward and I wanted her to give me that counsel.

“I made the call on a Tuesday and explained to her the difficulties that I saw and the heartbreak that I see around me and asked her to come and to give me advice because that’s the thing that I really value from a person with her integrity, with her track record that is unblemished, and to know that I’d get, absolutely, the truth there.

Yesterday, Trinity College Dublin announced that it will be opening a new Centre for Middle Eastern Studies funded by the Mohammed bin Rashid Al Maktoum Foundation, an educational charity established by the UAE Crown Prince.

The University Times previously reported that the centre would be funded by a €5.5 million donation from the charity.

In a press statement yesterday, Provost Patrick Prendergast referred to the centre as  a “generous gift from the Al Maktoum Foundation”.