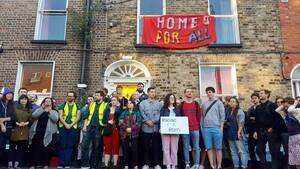 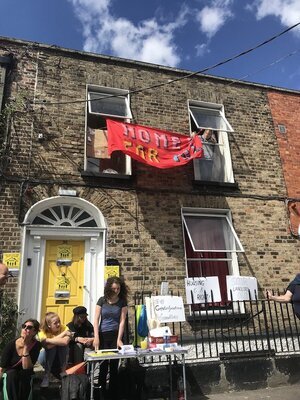 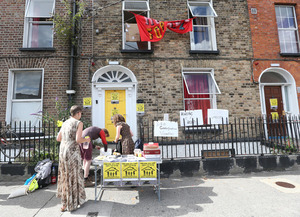 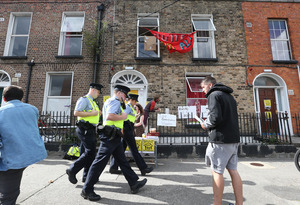 Outside 35, Summerhill Parade in Dublin 1

35 Summerhill Parade is a property owned by Pat and PJ O’Donnell (owners of POD, and sponsors of the Clare GAA team).

This house is part of a cluster of properties on Summerhill Parade owned by the O’Donnell family. All properties had similar issues with overcrowding, poor conditions and dodgy cash in-hand dealings.

In May, a mass eviction occurred between the five properties resulting in these 120 tenants being illegally evicted over the duration of a week.

The O’Donnell’s bought Aldborough House, a derelict Georgian mansion, in 2016 and have recently got approval to develop this site into office spaces.

No consideration was given for the local community and their needs in these plans.

There have been push from the owners to create slum conditions in the area as a means to run housing prices down and buy up bargain properties to redevelop – after all, the workers in the O’Donnell’s new, plush office spaces are going to need equally plush places to live.

It’s a fine example of gentrification in action.

Since the evictions in May, these properties have sat empty while the housing crisis worsens.

Housing and community activists today have occupied the property of Summerhill Parade because enough is enough, Pat O’Donnell should not be allowed sit on these potential homes.

Rent hikes, evictions, poor housing conditions; people stuck in overcrowded homes, living in bunkbeds, or packed into their relative’s homes; people couch-surfing, sleeping rough, living in hostels, hotels and direct provision – we hear about these horrendous situations every day now, we all know somebody who is affected. And yet, those in power sit on their hands. There is no political will to make real, meaningful change to our housing crisis.

Is that the houses owned by Pat O’Donnell on Summerhill Parade be compulsory purchased by Dublin City Council and given to the local community. We want to highlight that private, vacant properties can, and should be put into public ownership.

All vacant land and properties should be put under public ownership.

We call for people to take action and get involved in the housing movement, a wider demand of homes for all. Those interested in setting up similar occupations, please get in touch with the page.

The housing crisis is not a natural disaster; we do not need to accept that this is simply the way it is. But things won’t get better on their own – action is needed, by people and for people.

Statement from Summerhill Occupation this afternoon.

Following a rally outside the GPO on Dublin’s O’Connell Street, a group of housing activists occupied the vacant property at 35 Summerhill Parade .

Anyone who wishes to get involved, can contact the group here or email Dublincentralhousingaction@gmail.com or DCHAvolunteering@gmail.com.

Yesterday: Meanwhile At The GPO

Full statement from the Summerhill occupation demanding action to be taken on the #HousingCrisis and a demand of #HousingForAll
BUILD PUBLIC HOUSING NOW https://t.co/EiwmAqAjzW pic.twitter.com/XHxjhKKuUO