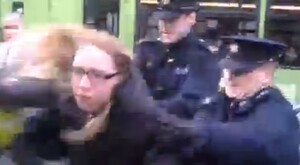 By gallantly kneeing me in the lughole.

“I actually believed that the Taoiseach was in the first car that had left and I didn’t actually really see the other car coming out. So I slowly went to march, not to march, but to walk across the road because I thought that the cars were gone and I was going to go over to where all the other protesters were.

And as, you can even hear me in the video saying, ‘excuse me’ to one of the guards. As I walked slowly out onto the road, someone kind of shouted, ‘Kenny, Kenny, Kenny’ and I turned around and I could see him in the car and he kind of smiled a bit and I just automatically, knee-jerk reaction, banged on the bonnet, ‘Out, out, out’.

And that was it, next thing I knew, I was on the ground, being hurled to the ground. The car could have just pulled out, very easily. You know, all them guards had to do was hold me back. They did not have to pick me up and throw me to the side of the road or throw me onto the path.”

“I was thrown from the road over to the path, narrowly missed a bollard. And I actually believe that it’s thanks to, one of the guards, one of the guards in the black, he bent down at the end of it but you can clearly hear his knee, now that’s his knee hitting the bollard. And he saved my life, that one did. The tall guard in the black, he saved my life because he pushed my head out of the way with his knee. I actually thought I had hurt my neck but it turns out it wasn’t, it was his knee that was actually pushing into my neck to turn it away from the bollard.

My hip is quite badly bruised. It’s quite sore underneath… I’m out on the streets every morning, helping to stop the installations but doing it peacefully. I’ve never been arrested, I’ve never been injuncted. You know, I do, I’m a peaceful protester, I’m only doing this for my son. I need to have a future for my son and the way I see it is our country is being sold off, bit by bit, to the highest bidder.”

Fiona Healy who was removed by gardaí from the path of Enda Kenny’s car outside the Mansion House, Dawson Street, Dublin on Sunday speaking on RTÉ Radio One’s Morning Ireland 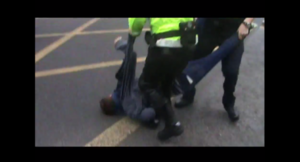 You may have seen the video footage of John Rooney, 22, which shows him being dragged upside down by gardai, forcing his head to scrape along the ground, outside the US embassy on Saturday during a protest in support of the people of Gaza.

Mr Rooney then began to have an epileptic seizure and friends needed to give him medicine.

The Irish Mirror has since reported that Mr Rooney plans to make a complaint to the Garda Síochána Ombudsman Commission over the incident. 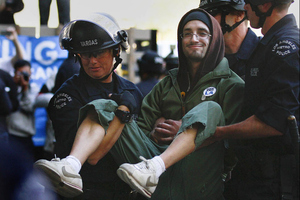 On the corner of 4th and Figueroa in downtown Los Angeles.