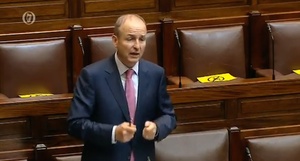 Leaders' Questions: SF kicking off with today's cut to the Pandemic Unemployment Payment. Taking effect in today's payments, but put in place 24 hours before Dublin went to Level 3… while the Government also appoints 10 more special advisors for ministers

“The real danger we face now is this – that people become more terrified of losing their job, losing their home, of not being able to provide for their family than they are of the virus”, says Sinn Féin leader @MaryLouMcDonald, calling for more #Covid19 supports pic.twitter.com/opTPmF9hFw

The Taoiseach has defended the Government’s decision to appoint ten special advisers for Junior Ministers.

He was responding to Sinn Féin Leader Mary Lou McDonald, who said she was gobsmacked and astounded at the move.

She said this was happening following a mean cut to the Pandemic Unemployment Payment that will be felt by many people from today.

Micheál Martin said the PUP originally came in as a 12-week scheme and the Government has already put €3.5 billion into the scheme.

He said the economic impact of Covid could go right through the entirety of 2021, and that the fiscal planning has to take that into consideration.

Social Democrats co-leader @CathMurphyTD calls on Taoiseach @MichealMartinTD to include parents of children who are sent home from school due to #Covid19 concerns in the enhanced illness benefit scheme | https://t.co/eLzzd0kQye pic.twitter.com/uOoMN8vHqB